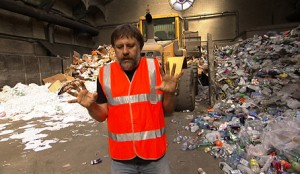 I’ll show you the life of the mind. Astra Taylor’s second feature, after “Zizek!”, her debut portrait of the motormouthed mania of Slovenian thinker Slavoj Zizek, is comprised of walk-and-talks that riff on Socrates’ statement that “The unexamined life is not worth living.” What’s graceful about her listening-in to the monologues of the likes of Zizek (Zizek! Again!), Cornel West, Avital Ronell, Peter Singer, Kwarne Anthony Appiah, Martha Nussbaum, Michael Hardt and Judith Butler is simply that: Butler talks about our culture’s investment in individualism while walking through San Francisco’s Mission District; a garbage heap for Zizek (Zizek! Cultural detritus!) to use as pulpit about ecological issues; the backseat of a taxi with West, hurtling from one appointment to another. As someone who was homeschooled as a child, Taylor has a nicely quirky perspective. As she told Aaron Hillis at IFC.com, “When you’re unschooled, the world is your classroom, and it’s all about experiential learning: by doing, at your own pace, and on your own time.” One thought-provoking conversation at a time, even if all don’t hit the same high marks, Taylor’s husband, Jeff Mangum from the band Neutral Milk Hotel, contributes to the soundtrack. 88m. (Ray Pride)