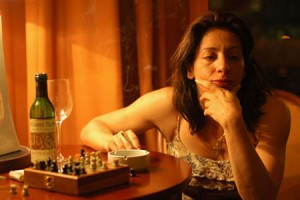 Anna Broinowski’s “Forbidden Lie$” is a thrilling tapestry of fact about fiction about facts about lies and lies about lies; its great marvel as a documentary is the inventive, lucid fashion in which she unravels the 2003 tale of Australian immigrant Norma Khouri and her bestseller about the “honor killing” of her best friend in her native Jordan, which led her to flee. Fame follows. As does the revelation that Khouri was actually a Chicago con-woman whose weave of overlapping stories, confessions, retractions and further confabulations are endlessly fertile and inventive. When “Forbidden Lie$,” a largely overlooked Australian production, was programmed at True/False 2008, it was a reminder of one of the reasons film festivals exist: to display the overlooked, to champion the devious and delightful possibilities of cinematic language. Documentaries can be as dreamlike as fiction films, and Orson Welles’ “F for Fake” is not the only magic carpet ride about truth and untruth, representation and deception, and the joy of staring into the face of the trickster who can trick you again, again, again, and you come back for more. In this way, “Forbidden Lie$” is also a love story: between a filmmaker who has found a perfect subject and a con artist who has found their most credulous audience of one. After the showing in Missouri, Broinowski admitted, “Neither of us trust each other, but we’re going to be friends forever.” 104m. 35mm. (Ray Pride)