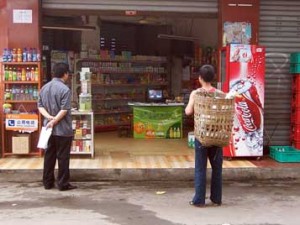 “Taking Father Home” (Bei yazi de nanhai, 2005), the 2005 directing debut of Ying Liang (he’s finished two features since) opens with 17-year-old Xu Yun (Xu Yun) taking a bus to the city in search of his father who left their village six years earlier. The region is about to be flooded by a development project. Xu’s mother and neighbors must relocate. Xu intends to take his father home. Besides an adorable pair of white geese in a basket he’s hauling, Xu only has a long knife and the address of the Happiness Hotel where his father once stayed. Xu learns he may be a big deal boss in the construction or real estate business. Before Xu learns more and accomplishes his mission, two father figures will step into his life and try to steer him. Scar (Wang Jie) is a hustler who teaches Xu how to profit off pickpockets, and how to eat watermelon “like a real man.” Police officer Liu (Liu Xiaopei) also lends a hand. Ying and co-writer Peng Shan take headstrong Xu and his quacking cargo for a tour of China in social flux. Loud public address speakers and omnipresent televisions and radios fill the soundscape with cacophony and context for the wide-eyed visitor. Designed with deep-space framing and long takes with sublime details, “Taking Father Home” is a wondrous quest by a deadly serious son. Xu acts on a primal impulse to restore his splintered family that no one, not even his mother, can fathom, before floodwaters immerse his home. With Song Cijun, Chen Xikun and Liu Ying. In Mandarin, with English subtitles. 101m. (Bill Stamets)