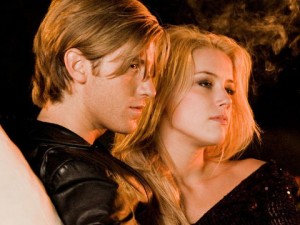 What’s most notable about “The Informers,” the fourth adaptation of a novel by Bret Easton Ellis? During the screening, in reel three, there was a very interesting bit of fuzz that got caught in the gate and lingered at the bottom of the frame for a bit before escaping in a wild hairy burst across the frame. Turpitude and torpor: if this is decadence, give me Häagen-Dazs. Director Gregor Jordan’s earlier movies like “Buffalo Soldiers” (2002) had elements that kept him in the “promising” category. This inert botch kicks him out of it. The quality I admire about Ellis’ writing is the rhythm of his prose. The way words accumulate can convey affectlessness on the page in the way movies can’t with real human beings shuffling across the screen. In “The Informers,” which Ellis adapted from his 1983-set novel with Nicholas Jarecki (director of the 2005 bio-doc on filmmaker James Toback), vapid Angelenos fall into demonic vice, or more correctly, daily doldrums lightly inflected by drug, fuck and neediness. There’s no dramatic momentum and there’s less a problem of characters being unsympathetic as uninflected. It doesn’t help that the cast is mostly comprised of weak actors who can’t hold the screen, or that Mickey Rourke, playing a child-drugging, child-raping, child-kidnapping sleaze comes off as merely a beaten slab of man-tan. Dull characters, like the four mopey leads, male blond dye-jobs all whom you can’t tell apart, are just pallid dullards, rather than insightful or intriguing reflections of cultural anomie. You’d think anomie would come readily to a movie with an engagingly tacky soundtrack heavy on the likes of Wang Chung’s “Dance Hall Days,” Gary Numan’s “Cars,” A Flock of Seagulls’ “I Ran” and Men Without Hats’ “Safety Dance.” The madness of Bruno Dumont’s “29 Palms,” that would be nice. The explosive ending of “Zabriskie Point”: that would be powerful. Give me tony ennui, or bring me another cuppa coffee. A rail-thin Billy Bob Thornton with a hairpiece of visible yet fascinating needlework comes off as a louche polecat; as his newsreader mistress, Winona Ryder pops her large eyes, and as his estranged, teen-boffing wife, Kim Basinger makes the mistake of acting as if she were in a real movie. The female lead, a perpetually topless blonde unicorn doodler, is held up in the final shot as a bruised, blotched, bikinied symbol of… something. The movie seems to want to embody the line from Nietzsche’s “Beyond Good And Evil,” “If you gaze for long into an abyss, the abyss gazes also into you.” In the case of “The Informers,” Nicht. One of the blonds mopes, “I need someone to tell me what’s good and someone to tell me what’s bad.” Joan Didion’s novel, “Play It as It Lays”: Good. The film of “The Informers”: Bad. 98m. Widescreen. (Ray Pride)