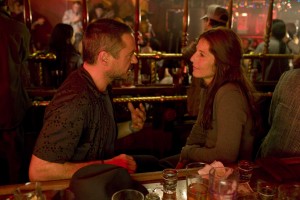 “The Soloist” doesn’t explain itself: neither Hollywood uplift nor full-on arthouse effort, it succeeds by moment and mood.

Thirty-seven-year-old English director Joe Wright’s three features—”Pride and Prejudice,” “Atonement” and, now, “The Soloist”—succeed in moment and mood as cinematically as anyone’s work on the studio scale today. I don’t mean anything particularly airy by “cinematic,” merely noting that Wright works with composed, lucid visual images combined with intent sound design that are at once concrete and elusive: this is this, but it is also something else.

The mist-haze of spring dawn in “Pride”; the refraction of light through streaked, imperfectly annealed glass in “Atonement”; angel’s-eye overhead views of Los Angeles topography in “The Soloist” that resemble despairing movie and fine arts photography critique but in fact suggest, celebrate, how lives not only overlap, but flow together. There is a late montage of three-to-four shots of a woman’s perspective from an airplane on her first trip to California that invokes the stark, thrilling geometry of a painting by Diebenkorn and then the searing azure of Hockney’s life alongside swimming pools: decorative? Surely. Apt? Certainly.

In “The Soloist,” Wright is not afraid to merge, and it’s a suitable instinct for its story of Los Angeles columnist Steve Lopez (Robert Downey, Jr.), who finds a perfect story in an imperfect man, Nathaniel Ayers, a musician (Jamie Foxx), Juilliard trained, but whose mental instability finds him broken beneath the strong pillars of downtown Los Angeles expressways and overpasses, playing a violin with only two strings. Skid Row’s mayhem bruises Nathaniel. (Wright’s hellish portrayal of the streets seems overscaled unless you consider it the adrenaline-jumpy reaction of an outsider to the unfamiliar surroundings, which are calmer on further visits to the area.)

At the Spring Street offices of the Times, Steve banters with his editor, who’s also his ex-wife, Mary (Catherine Keener), and keeps focused on his work as the newsroom is pared away around him. Raccoons devour his lawn. He stows regrets. Drinks. Mutters. Banters. “I do words for a living.” Nathaniel? Merely hears voices. There is a scene where Steve, after befriending, helping and writing about Nathaniel, gets access to a rehearsal of a Los Angeles Philharmonic performance of Ayers’ beloved Beethoven. Drawing on his extended experience as a designer of projections in the early 1990s for groups like Underworld and The Chemical Brothers, Wright visualizes Nathaniel experiencing synthesesia when he closes his eyes, seeing the music as swirls of bright, vibrant color. (Wright once told the Guardian’s Jason Solomons, “I was definitely off my head on ecstasy for quite a few years.” Does this make Wright the first E-auteur?) Eyes open, Steve sees only a man with his eyes closed.

The scene after: Steve and Mary are at a bar that’s raucous, red-lit. A portly fellow journalist is drunk up on the bandstand, freshly Zelled from the latest round of cuts in the L.A. Times newsroom, ready to snatch the mike from the singer. Foreground, Steve wants to convey his passion about Nathaniel’s passion, he’s never loved anything so much in his life, he tells her. The look that crosses Keener’s face! Elegant, articulate, intelligent, catching crestfallenness from creasing, steely, sudden, all comes down. And Downey reacts, conveying in two or three fleet gestures that demonstrate so fully that Steve knows, as a writer, he’s blown the moment, and the others moments, and the epiphany of the empathy that had welled in his head because his work with words was faulty in the face of his colleague, his confessor, a woman who still cares deeply for him. This is exquisite, emphatic craft. Just as Foxx finds the dithering, feathery grace of Nathaniel’s manic word-emanations, Downey finds Steve’s deadline-fueled, deadline-filled attentiveness and impatience, as well as regret on a regular cycle.

Wright’s sense of storytelling is sensorium: a flashback to young Nathaniel in Cleveland seeing a sedan engulfed in flames pushed down a street one night is beautiful, haunting and more ambiguous than anything else. What is this besides a cart of steel liquid with a sleeve of orange caresses of fire? When little Nathaniel walks down a snowy street, he could fold and fit readily into the cello case he carries. When Steve presents Nathaniel with a cello, Foxx’s look of supplication as he glimpses the instrument is sublime: a hungry man falls on bread. There are several punchy passages in Susannah Grant’s script—”You couldn’t stop that earthquake, you can’t fix L.A. and you won’t cure Nathaniel”—but it’s faces and spaces, inchoate feelings, that hit the highest notes in “The Soloist.”

Coda: as the closing credits conclude, the music, the symphonic transport of Nathaniel’s great love swells, climaxes. A beat of silence. A rasp of sound, could be a bow clumsy against string. The familiar final legalisms are almost done, scrolling to the ceiling. And: in parallel, as conclusion, a burst of surely no more than a second, the sound of a microcassette playing in reverse as when a writer is checking a quote, checking a quote, compulsively. It’s a buried blip, but typical of Wright’s resolute gift for filigree. Hardly a sound, hardly a second, and it’s elegy, elegy for witness, for metro dailies, for a pair of lives that crossed, merged.

“The Soloist” is now playing.