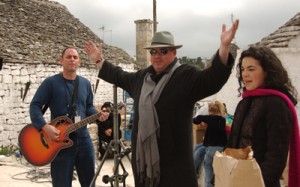 Filmmaker Michael Jacobs takes a subject it would be easy to ridicule yet lets his tragicomedy unfold without disdain: an eccentric preacher, Richard Gazowski of San Francisco’s Voice of Pentecost Church, believes God told him to make a mash-up of “The Ten Commandments” and “Star Wars,” a multi-million-dollar 70mm science fiction epic entitled “Gravity: The Shadow of Joseph.” The fact that Gazowsky didn’t see a movie until he was 40 is only the first augury of the pipe dream that will almost certainly backfire. (Yes, “The Lion King.”) A few of Gazowsky’s observations: God told him, he tells us, “You will start a film company. I want you to be the Rolls Royce of filmmaking, be better than anyone in the world.” Jacobs simply watches, even when Gazowsky tells his collaborators things that are daffy, like instructing a designer to come up with “a Paris café in ancient times, a futuristic-ancient Starbucks deal.” As problems pile up, everyone’s convinced German money’s right around the corner. And so they wait… Religious devotion cannot solve every miniscule problem in life, let alone a film set ranked with amateurs. “Creation was easy. Filmmaking is hard” is a witty tagline promoting the picture, but the gift of the fleet, entertaining and observant “Audience of One” is an unwillingness to be glib about ambition and hubris and yes, megalomania, in this improbable form. 88m. (Ray Pride)