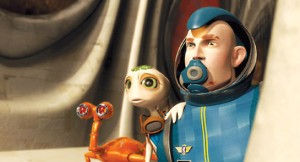 In his seven-minute animated short “Terra” (2003), Aristomenis Tsirbas portrayed a teenaged being named Mala who defied The Elders by inventing a telescope to peer at a distant entity headed toward their planet Terra. “Terra” ended with the revelation that the anticipated “new god” in the sky was in fact an approaching warship emblazoned with a U.S. flag. Instead of stars for fifty states, there were 765 stars. Now Tsirbas expands his CGI short into an animated feature in “RealD 3D.” Evan Rachel Wood voices the intrepid Mala, who looks like a saucer-eyed planaria with a pug nose and a nice smile. All manner of critters share peaceable Terra, no matter what their means of propulsion. Wings and propeller-gear let them move hither and yon, and yon and thither. When a mighty orb darkens their sky, enraptured Terrians proclaim: “A new god in the sky!” and “Take me!” But the visitors are violent. Mala captures one of the injured hostiles, Lt. Jim Stanton (Luke Wilson). She insists that his robot sidekick Giddy (David Cross) upload her with English so she can communicate. (As in “Outlander” with Old Norse, this is done in a second or two through her eyeball.) Mala learns that earthlings despoiled Earth, then terraformed Mars and Venus. Two centuries later those colonies demanded independence. Survivors of that war lived for several generations on an intergalactic arc in search of a new homeland rather like Terra. “Everything different scares them,” notes Giddy. “They shouldn’t have left home,” snaps a Terrian. Besides detailing a fantastic world of beings and machines, Tsirbas and co-writer Evan Spiliotopoulos pose unusually sober issues of ‘us versus not-us’ after Mala and Jim bond as go-betweens. Both are branded traitors. Their respective life forms find the other’s atmosphere fatal. Is co-existence an option? Op-ed zingers about extolling war heroes and torturing aliens for intel hit their marks in a film that makes knowing use of the phrase “occupied planet.” With the voices of Brian Cox, Dennis Quaid, Justin Long, Amanda Peet and Chris Evans. 85m. (Bill Stamets)