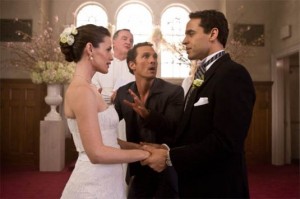 Bravely and boldly, mildly beguiling romantic comedy “Ghosts of Girlfriends Past” takes a stand for heterosexual matrimony and monogamy. Because a lifetime of superficial one-night stands only leads to a pathetically low turnout at your funeral. Orphaned at the age of six, rich kid Connor grows up in a grand style at a Rhode Island estate (exteriors were shot on a Massachusetts estate that was once a summer home for a Chicago industrialist). He looks after his little brother Paul and learns moves from his lecherous uncle Wayne (Michael Douglas). Connor (Matthew McConaughey) returns to the estate for the wedding of Paul (Breckin Meyer). Connor’s rakish stand on love and vows is wreaking chaos, and then Wayne’s ghost turns up and hooks up Connor with three ghosts who let him supernaturally revisit his handling of girlfriends in the past, present and future. Connor sees what a dick he was, he is, and will be until the day he dies, unless he conquers his fear of real feelings and realizes that his best friend from childhood is really the only woman for him forever, Jenny (Jennifer Garner). Mark Waters (“Mean Girls,” “The House of Yes”) directs with bridesmaids in mind from a script by Jon Lucas and Scott Moore (“Four Christmases”) with these lines: “Spooning is nice.” … “Not as nice as forking.” With Lacey Chabert, Robert Forster, Anne Archer, Emma Stone, Noureen DeWulf. 115m. Anamorphic 2.39 widescreen. (Bill Stamets)