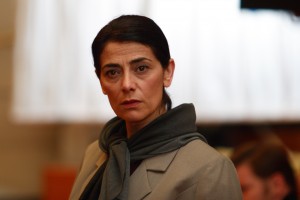 Hiam Abbass is the heart of Eran Riklis’ “Lemon Tree” (Etz Limon), a tender parable about a widow’s lemon trees getting in the way of a war. Abbass may be best known for her role in Tom McCarthy’s’ 2008 “The Visitor,” but her work in “Munich” and especially “Paradise Now” (2005) is always stirring. She plays Salma, a Palestinian widow who lives on the “green line” border between Israel and the West Bank. The Israeli Defense Minister moves into a new house opposite her fifty-year-old lemon grove, and Israeli security forces quickly identify her trees as a threat to the Minister’s safety. Working with a young Palestinian lawyer, she argues her case up to the Israeli Supreme Court to save her trees. Sparks ensue. As well as an unlikely ally: the Defense Minster’s wife, who becomes a confidant. Abbass’ performance comprises melancholy, but not resignation; sorrow, strength and elemental human beauty. Riklis directed 2004’s drama “Syrian Bride,” and the cross-cultural, political observations of his work remain universal and his flavorful subtlety just as rich. With Doron Tavory, Ali Suliman, Rona Lipaz-Michael, Tarik Kopty, Amos Lavi, Amnon Wolf, Smadar Jaaron, Danny Leshman, Hili Yalon. 106m. (Ray Pride)