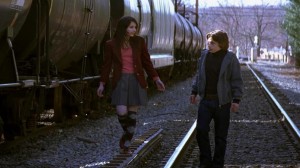 Or, John Cheever’s “Christmas Story.” Wrap your mind around that, and add characters of all ages that say “fuck” “shit” and “motherfucker” a lot, and you’ve got a taste of “Lymelife.” Derick Martini’s bittersweet gem (written with brother Steven) is set on Long Island in the recession of 1978-79, where you’re never far enough from the tracks not to hear trains wail in the distance, dead center in what a radio announcer calls “the tristate suburban area.” Reviewers who have called the story familiar are overlooking the richly profane dialogue—as “fuck”-filled as anything by executive producer Martin Scorsese—and the serene spite of adult and young performers alike. Coming-of-age story, maybe; this storytelling? Sturdy stuff about ordinary lives and extraordinary rage. Skinny Scott (Rory Culkin) is disgusted with the world around him, starting with workaholic-rage-aholic realtor father Mickey (Alec Baldwin) and his hatefully possessive mother (Jill Hennessey) consumed with insecurity and pickled in pink zinfandel, shuffling in her scuffed brown clogs. Culkin offers an indelible sense of teen-boy virgin blueballs. Still, he admires older, bulked-up brother Jim (Kieran Culkin), who, on a weekend visit, offers lessons in bully beatdowns. The family lives near another family, including Charlie (Timothy Hutton), who’s out of work after contracting Lyme disease from a tick in the woods that surround the town, mom Melissa (Cynthia Nixon), who works for Mickey as well as having sex with him, in one case, unwittingly, in front of Charlie, who hides much of the day in the basement. They have a daughter, Adrianna (Emma Roberts), whom Scott has had a crush on since childhood. Wide-eyed, he’s in thrall to her passive-aggressiveness and argyle kneesocks. Their dance of tease and play has finely observed and played moments in abundance. (The getting-drunk-in-the-confessional scene is the right kind of rude.) The smirkiness between the two Culkins is brightly brotherly, and stately, plump Baldwin is piggy-eyed perfection as an unregenerate philanderer. The line “We all, change, somewhat, no?” is a quizzical gem in Baldwin’s pursed mouth. The ending suggests generational change, but also old, bad blood coursing across the lives of the new blood. In the accomplished crosscutting that concludes “Lymelife,” Martini is bold enough to invoke the contours of Jean Renoir’s “Rules of the Game,” in which a gunshot, errant or not, may cast long shadows across a gray manor house. I wish I could’ve seen Scorsese’s smile when Martini first described the scene and its echoes. 94m. (Ray Pride)