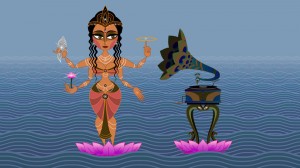 Producer-director-writer Nina Paley’s animated musical “Sita Sings The Blues,” about the tribulations of an Indian princess, is indie outside the lines, a sweet burst of color and imagination. Winner of the 2009 Gotham Awards’ “Best Film Not Playing at a Theatre Near You” (I was on its jury), “Sita” almost didn’t make it to theaters even after acclaim like Roger Ebert’s out-of-queue epic of praise after he’d seen a DVD a few months back. The blues songs in the movie, however old, are still under the ever-lengthening shadow of long-lived copyright law. Paley describes her tribulations at sitasingstheblues.com and the music publishing combines, such as Warner-Chapell and Sony-ATV at sitasingstheblues.com/restrictions.html. “I hereby give ‘Sita Sings the Blues’ to you. Like all culture, it belongs to you already, but I am making it explicit with a Creative Commons Attribution-Share Alike License. Please distribute, copy, share, archive, and show ‘Sita Sings the Blues.’ From the shared culture it came, and back into the shared culture it goes,” she writes on the site. Paley’s is a fascinating battle in the artist-vs.-conglomerate era we’re in, but should not obscure the fact that the work she’s made is a gorgeous, seductive hand-made artifact that will keep you smiling for days after you’ve seen it in 35mm projection, as at Siskel this week. 82m. (Ray Pride)