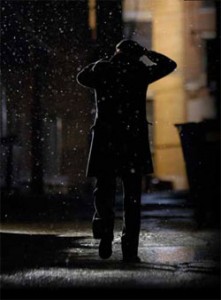 Michael Keaton, who starred in “My Life” as a Chicago native with terminal kidney cancer, returns here as a Windy City hitman and tailor, as well as the film’s director after an acute case of appendicitis prevented Chicago writer Ron Lazzeretti from directing. Keaton’s ever-coughing character, Frank Logan, is felled with a case of pneumonia. He also has an untreated condition. Drawn to precipices, he stands atop tall buildings and bridges to ponder doing the right thing by doing himself in. In the meantime, he sublimates his business ethics by staging hits to look like suicides. One snowy night Keaton perches on a rooftop after making a kill, with a silencer, in a nearby office. Like the Batman he’s played twice before, Keaton could pass as a shadowy gargoyle. As Kate Frazier (Kelly Macdonald) leaves work that night she looks up and sees his silhouetted figure. The next day two detectives come around. One of them, Dave, is played by executive producer Tom Bastounes, Lazzeretti’s co-writer on his 1999 feature, “The Opera Lover.” (Bastounes also played the titular lead.) Dave tries to date Kate, who just moved here. Like her new co-workers, he too asks her where she got her black eye. She says she was bumped while using a telescope, and tells no one about the abusive husband she fled, until this creepy born-again cop tracks her down and begs forgiveness. Dave and Frank try to protect her. Kate fears God may not forgive her for consorting with a fallen guardian angel that may answer her prayers for protection. Keaton’s best scene in this understated thriller places Kate and Frank in a hospital room on Christmas day. The timing of their silences is near perfect. Cinematographer Chris Seager nails the overcast hues of “Payback” and “The Weather Man.” And editors Howard E. Smith and Grant Myers compose a closing montage for an existential riff on the old-fashioned cliffhanger. 96m. Anamorphic 2.39 widescreen. (Bill Stamets)