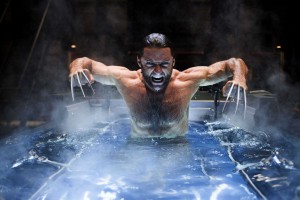 Nice thing about a prequel is that first-time viewers are free to watch with no thought of fast-forwarding through later storylines to collate fact-checking. Nothing like a plot with memory loss to make narrative room for embroidery and backstory. This Marvel Comics franchise inspired films dating from 2000 about mutants in our midst who sport extraordinary powers. Stigmatized as freaks, they are “weaponized” by rogue military interests. The brisk screenplay by David Benioff and Skip Woods kicks off in 1845 in the Northwest Territories of Canada. Two young brothers run into the woods, fleeing the scene of crimes of passion. Their biological aging apparently plateaus in young adulthood, and they fight side-by-side in the Civil War, World War I, World War II and Vietnam, where the older brother Victor (Liev Schreiber) starts raping on duty. Logan (Hugh Jackman, a veteran of three prior “X-Men” films) tries to temper Victor. Col. William Stryker (Danny Huston) recruits the brothers for an off-the-books special-ops team composed of other outcasts with lethal gifts. Logan quits after a Lagos mission goes too far, and he retreats to the Canadian Rockies to work as a law-abiding lumberjack. But trouble finds him and he finds even bigger trouble, from New Orleans to Three Mile Island. Gavin Hood directs with little of the nuance seen in “Rendition” and his second, award-winning feature “Tsotsi,” both of which lacked the budget for fireballs here. Adolescent issues of identity, per the genre, range from “this is who we are” to “you are not an animal.” If you prick us, do we not self-heal after slashing you to shreds with our in-built razor-claws? With Lynn Collins, will.i.am, Ryan Reynolds, Daniel Henney, Taylor Kitsch, Kevin Durand and Dominic Monaghan. 108m. Anamorphic 2.39 widescreen. (Bill Stamets)