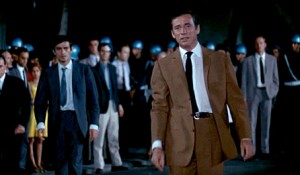 “Any resemblance of real events, to persons living or dead, is not accidental. It is DELIBERATE” reads an opening title of Costa-Gavras’ “Z,” a rich political provocation as well as feverish entertainment, a buzzing mix of French New Wave style and fast-paced American-style intrigue. Liberal Greek politician Gregoris Lambrakis was assassinated in 1963, and like Vassilis Vassilikos’ book, “Z” (1969) recounts the events before and after his murder. Unable to shoot under the rule of Greek junta and with the political events of 1968 preventing co-productions, the expatriate director shot quickly, in French, on a minimal budget in Algeria. “Z” alternates between claustrophobia and displacement, from small rooms to depopulated city streets, as threatening by day as by night. The locations resemble Greece, but in a depopulated, nearly abstract fashion. Most characters are identified only by the names of their jobs: “the doctor,” “the advocate.” Of the telephone book full of quickly etched characters, Yves Montand’s political leader has gravitas, but the great performance is Jean-Louis Trintignant’s as the obstinate magistrate who brings evidence together to prove the conspiracy and tries to bring the corrupt rulers down. Behind Godard-like shades and wearing a pale blue suit with knife-sharp lapels and lines, Trintignant’s equipoise is thrilling. The meaning of the title, revealed to non-Greek speakers at the end of the film, is bitter, lunatic and brilliant. The then-imprisoned Mikis Theodorakis’ insistent music is the most Greek element of the mood of “Z” (if you discount dour pessimism) and an important part of its power. And, speaking from recent personal experience, “Z” has the most authentic representation of getting your head lacerated in Greek street violence that I know. (Ray Pride)