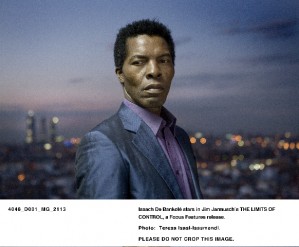 There’s a lovely, lovely comic harrumph from Preston Sturges’ “Sullivan’s Travels”: “Nothing like a deep-dish movie to drive ’em out in the open!” Sturges adored both the patrician and the philistine in human nature and made comic hey-hey out of both. Jim Jarmusch’s latest, the glorious, gleaming, controlled-in-the-service of repetition-compulsion “The Limits of Control” managed in its first weekend in New York and Los Angeles to drive a raft of nay-saying critical minds out into the open, and it’s a bit of a sorrow to read so many resistant to its hypnagogic pull. The Wall Street Journal’s smart Joe Morgenstern’s review read, in total, “Jim Jarmusch’s Dada meander, shot by Christopher Doyle, is empty and excruciating—that’s really all you need to know.” This may not be your cup of cinema, but cinema it is, and it’s dreamy. And if you love movies, it’s aromatic, deep-dish as all get-out.

Isaac de Bankole is a nameless man moving toward a destination in Spain. His suits and shirts are as sharp as the planes in his dark face. He gets cryptic instructions from a succession of characters, also nameless, who offer clues to his assignment, but repeat what the preceding figures have said as well. He’s also prone to order two cups of espresso, “not a double, in separate cups.” He eats the cryptographic instructions found in each “Le Boxeur” box of matches. A series of numbers and letters hardly anyone could scan so quickly. Washes it down with that second cup of cappuccino. Is this origami narrative (which also references Cubism) a case of a shiny man taking blotter acid repeatedly? The trip, with Jarmusch’s ideas about painting and contemplation and reflection and self-reflection, is more intriguing than the destination: let us just say that Bill Murray’s character may have a political double, but he also matches up with Carroll O’Connor’s powerless accountant in “Point Blank.”

Jarmusch says he likes to leave mystery to the viewer, but in interviews he’s footnoted much of what’s on screen in his latest movie, from naming the film’s production entity “Pointblank” after John Boorman’s trippy-hippie 1967 neo-noir revenge thriller, in which Lee Marvin plays a man trying to collect a debt from the mob, only what he’s owed; the movie suggests that the character, “Walker,” is a dead man walking, and the movie is his dying dream. De Bankole’s chromatic shirt-and-suit ensembles also draw from one of Boorman’s most intriguing color experiments in “Point Blank,” where Marvin’s pale, matched suit and shirt shifted color in each new scene to match the chroma of the new location or set. In “Point Blank,” it’s subtly trippy. Bankole’s flash is more about style here, but the color-coordinated ensembles are not just shallow decoration.

The title comes from a William S. Burroughs essay about the limits of language and perceptions of control. “What if Jacques Rivette remade Melville’s ‘Le Samourai’?” There are more references, and they’re thrilling for those in the glow: it’s a palimpsest of all the avatars of minimalism and cool that Jarmusch has steeped in through his entire career. I like the pull of what Jarmusch has put on screen, where the film’s components found him. It’s less turning of Tarot than tossing a dog-eared deck of Eno’s Oblique Strategies cards at opportune moments. Still, not every American filmmaker would bring up the bone-earnest filmmaking of Marguerite Duras, but Jarmusch does. He even finds a way to have a character bring in Finnster Aki Kaurismaki’s “La vie de Boheme” and another character’s tirade about “bohemians on hallucinogens.”

Working with cinematographer Chris Doyle, who shot most of Wong Kar-Wai’s work and Gus Van Sant’s “Paranoid Park,” the images are concrete and dreamlike at once. Tilda Swinton is one of the messengers met by the lone man. “Movies are like dreams you’re never really sure you’ve had; sometimes my favorite films are the ones where people sit there and don’t say anything.” Jarmusch has Swinton’s character reflect, drawing on an address she gave a few years ago. There’s a pause. Bankole turns his head a hair’s breadth. They don’t say anything. (She also references an image involving a bird that occurs in Tarkovsky’s “Stalker.”)

As psychology, “The Limits of Control” is shiny surfaces. As literature? A series of riddles, posed with cool alacrity. The form of the film, a series of repetitions with slight variations, comes closer to fine arts photography mixed with dance than most movies released in the U.S. The Lone Man could be a filmmaker surrogate, to push it farther: listening to the dreams of others, hoping to find a poetic thread to stitch them up. For some writers and directors, a subject presents itself when the “clothesline” appears, when the same subject comes up again and again. Such as the successive refrains of “You don’t speak Spanish, do you?” that opens every conversation of the almost entirely non-verbal character. And every scene insists, “Be in Spain. Be in Spain.” Be outside your mind.

“The Limits of Control” opens Friday.