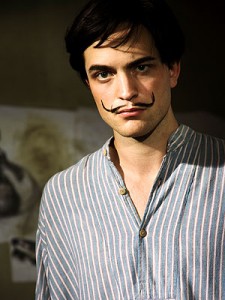 Come for the surrealism, stay for the gibberish. Terrible in a dull way that used to be more commonly called “unreleasable,” “shelved” or “rightfully forgotten,” Paul Morrison’s “Little Ashes,” starring “Twilight” biter Robert Pattinson, doesn’t rise to the level of dreadful. Pattinson plays a young, sallow, flabby Salvador Dali; Matthew McNulty, who looks absolutely nothing like the cockeyed, boxer-stout filmmaker Luis Bunuel, is a classmate and poet-playwright-activist Federico Garcia Lorca (Javier Beltran) becomes the center of the picture, which insists on a sexual obsession between he and Dali. Beltran’s sturdy, unlike the other actors, but like the other actors, isn’t given a modulated style of performance over the film’s duration. “I’m trying to be constructive here!” a character bellows in a scene that may as well have been played up against construction paper in a high school production. “Listen! I’m part of this underground movement,” Garcia Lorca explains. The only instant that rises from the doldrums is a scene that draws on the historical fact of Garcia Lorca’s assassination; the reality is touching even when the scene’s shot through blurred frills of field grass in an olive grove to the murmuring in English over the murmuring in Spanish of one of his seriously bloody poems. Also typical of the visual furze is a sunset scene where faces aren’t lit, golden hour replaced with molybdenum. (Call it “day-for-Twilight.”) Seriously, young Pattinson is given help by neither director nor editor, seeming in every other scene like he’s suffering the actor’s equivalent of dreams where you’re naked in a restaurant. To be more charitable, he delivers a rapt portrayal of mild bowel irritation. The gay and/or homoerotic component is negligible, even if you include the goopy, carbonated slow-motion scissor kick underwater to suggest twinkly infatuation between Dali and Garcia Lorca as well as a scene where Dali masturbates to the other man fucking a female friend (the fright-coiffed Marina Gatell) in a nearby bed and the composition of two shots centers oddly, even in an unrated film, on the woman’s bared, posturing anus. “We’ll go for breakfast at the Pelican and you’ll paint all afternoon!” A better line might have been “My best friend got executed in an olive grove and all he got was this lousy biopic.” The typing and formatting of the screenplay is credited to Philippa Goslett. 112m. (Ray Pride)