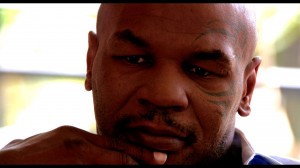 James Toback reportedly told a journalists’ roundtable in Los Angeles that Mike Tyson looked at his biopic-he’s an executive producer-and told his writer-director, “It’s like a Greek tragedy.” It remains unclear which tragic Greek and which Greek tragedian he had in mind. Before “Tyson” there was “Jim,” Toback’s 1971 book profiling another retired black sports star, former Cleveland Browns running back Jim Brown. Toback calls his “friend since 1985,” the former heavyweight champ, “a figure conjuring radical questions of race and class,” whose portrait in High Definition acknowledges “current radically shifting and radically impatient responses to modern life and media.” What’s radical in “Tyson” is not its style of split-screen and staccato mosaics, even if Toback claims he devoted a year to editing a two-camera, five-day shoot intercut with clips from bouts and newscasts, and photos and headlines into what we see today. Toback’s content, though, is retrograde. “Tyson” smacks of a racist kind of typecasting in depicting its subject as a child, a beast and a fool. For a geek sideshow, that is, not a Greek stage. Tyson comes off as a knowing accomplice in fashioning his cartoonish persona. His self-branding includes tattoos of Che and Mao, plus the facial inking of a Maori warrior. “I’m not an animal anymore,” he testifies. Physically humiliated as a boy in Brooklyn, Tyson sees his later years in the ring as a Herculean beat-down of inner demons. Adrift at age 42, bereft of “hundreds of millions of dollars,” he poses on a Pacific beach at sundown. His fast fists no longer earn him new wealth or respect. Tragic, by decision. 90m. (Bill Stamets)