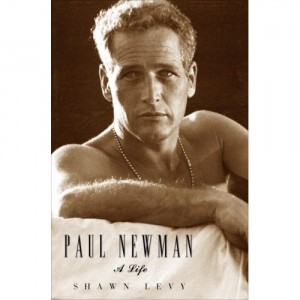 One of the metro daily film critics still standing, the Oregonian’s Shawn Levy, has written four nonfiction books, including “King of Comedy,” a life of Jerry Lewis. His “Paul Newman: A Life” (Harmony Books, $29.99, 490 pp.), is the first complete biography of the charismatic actor, underappreciated director and epic philanthropist. Levy thinks Newman was a lot like Lewis, or Frank Sinatra, whom he wrote about in “Rat Pack Confidential”: “Men like this have incredible capacities for work and activity.” Levy expects there’s probably a scurrilous book in the works, but he says the man and the life that he found in extensive research, poring over archives, articles, interviews, letters, legal documents and his own interviews. It’s a no-nonsense read with a satisfying amount of detail. [Disclosure: I’m listed in the acknowledgements for passing along interviews with Newman.]

After spending months in Newman’s reflected glory, I wondered what Levy thought made Newman such a looker. “There were the genes, of course: the first instance of what he called ‘Newman’s Luck,'” Levy tells me. “And the metabolism. And he did take good care of himself; he was sufficiently bourgeois to attend to his instrument daily, as it were, with exercise, the famous face-in-ice-water treatment, and so on. He even claimed that he kept his hair—despite having a bald dad and brother—by keeping it short and brushing it vigorously. But, too, he had great style: casual, a bit sloppy, but classic. Even in the height of the sixties and seventies he didn’t get wild with his clothes (unlike, say, Frank Sinatra who sang on TV once with a Nehru jacket and love beads). He wears gaudy outfits in ‘Slap Shot’ and it’s meant as a joke. Dressers on some of his films after the eighties complained that it was hard to make him look disheveled. Of all his gifts, that face, that hair, those eyes and that body were first and, he knew, very crucial. He truly had nothing to do with them, and they made him world famous.”

Spending all that time poring over the minutiae of another man’s life can lead to all kinds of shifts in perspective. “You begin to get the smell of a fellow after a while, and you start to develop a sense of what he would-wouldn’t say-do-think-feel. In the case of Jerry Lewis, I interviewed him for about five hours in two sessions at the beginning of my work and it was completely hair-raising and made me realize that all the bizarre and dark and unflattering things I came to hear in the coming years might have a basis in truth. I never spoke to Newman, and I had decided to treat him at a respectful remove from the get-go (I started the book in November, 2005); I became more impressed with him gradually as I researched and, this is the real test, because this is when they haunt your dreams, wrote about him. And then I found myself, unfortunately, completing the book as his cancer developed and became public and, finally, took him [away] about six weeks before I finished the first draft. It was an ordeal, in a sense, and a privilege. Remember, my last book was about a gigolo-bagman-money-grabber-likely murderer—Porfirio Rubirosa. So the idea of Newman as a saint in that company isn’t far-fetched.”

Newman’s Own has produced hundreds of millions of dollars for charities, but that wasn’t the limit of his generosity. “It’s closer to a half-billion: the $260 million or so that Newman’s Own has given away in twenty-five-plus years and his own personal interest in the company, which was valued in tax reports at $119 million and which he surrendered to his foundation in two payments just a few years before his death (indeed, before his illness).  I admired especially the personal, even whimsical (to use one of his favorite words) way he and A. E. Hotchner meted out charity:  sitting around a ping-pong table around Thanksgiving time and looking for places where they could really do some good in accord with their principles, aesthetics, politics and simple human decency.  And the Hole in the Wall camps, which Newman’s Own can only fund to a finite percentage for tax reasons, are extraordinary testaments to everything that he believed and hoped for and achieved.  There’s a book of letters from campers to Newman, and I think even Dick Cheney would break down crying after sampling just a few pages from it.”

Early gossip, especially from the NY Post, with which Newman feuded, jumped on a few passages about indiscretions. I ask Levy what questions interviewers failed to ask him about Newman. “There’s a howling error in there that no one has caught yet… and I’m not telling. And in the wake of the media interest in his beering and (single confirmed act of) womanizing, few if any interviewers care to ask something so banal as, ‘What is your favorite Newman film?’  The short answer to that is that I take one from each decade: ‘Somebody Up There Likes Me,’ ‘Hud,’ ‘Slap Shot,’ ‘The Verdict,’ ‘Nobody’s Fool’ and the filmed-for-TV performance of the 2003 Broadway revival of ‘Our Town,’ perhaps the most essential dramatic text in his life.  The weekend he died, I watched ‘Slap Shot’ and ‘Our Town’ again.  And in a house fire, I might grab that ‘Slap Shot’ DVD first.”