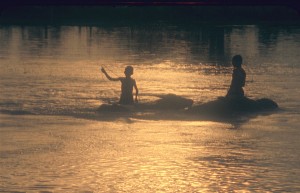 Ellen Kuras and Thavisouk Phrasavath have taken the longest time to make a longitudinal documentary outside of Michael Apted’s “Up” series, which has gone on for over forty years. “The Betrayal” (Nerakhoon) took over twenty-three years to film, a collaboration between the skilled cinematographer and her subject, whose family traveled from war-torn Laos to New York City. (Kuras notes that she’s been working on this film longer than she’s been a cinematographer.) Mingling archival footage, interviews, fly-on-the-wall observation and visually impressionist montages, Kuras and Phrasavath work to capture the violence of history on two decades in one family’s life, and by extension, the wars the U. S. left behind in Southeast Asia, the damage of which the citizens of those countries could not loose. “The Betrayal”‘s 2008 Sundance debut elicited rave reviews for its perceived beauty and tragic topic, but I was never gripped: the weave of time and family conflict and historical terrors never came together. Other reviewers have called it “lyrical… contemplative and impressionistic… shimmering… gripping… unusually moving… beautifully composed… remarkably beautiful… haunting… somber and gripping.” I’d like to have seen that movie. Scored by Howard Shore. 96m. 35mm. (Ray Pride)