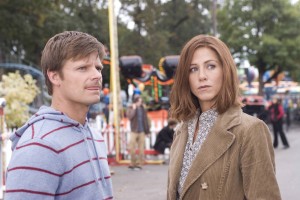 Jennifer Aniston plays characters with career paths unlikely to lead to love. In “The Good Girl” she played a clerk at Retail Rodeo in Texas. In “Friends with Money” she cleaned houses on the west side of Los Angeles. In “Management,” she’s on the road selling decorative paintings for Corporate Bliss, a company based in Maryland. Work brings her to an Arizona motel owned by the parents of Steve Zahn’s character. Overreaching his duty as night manager, he makes a clumsy move by bringing a complimentary bottle of champagne to her room, as if this was the practice of “the management.” Their first contact is small gem of comic stumbling, punctuated by one touch of negotiated intimacy. This may have been the heart (and the butt) of a one-act play set in a motel room by Stephen Belber, now making his film writing-directing debut. Check the well-made last names of his screen couple: Aniston is Sue Claussen and Zahn is Mike Cranshaw. Belber extends their courtship into a dogged saga with chronic failures at closure. The screenplay strays and the tone goes TV-dumb when Sue returns to an ex, a caricatured punker-turned-organic yogurt CEO played by Woody Harrelson. My fondness for this idiosyncratic romantic comedy checked out in not one, but two disappointing bits where Mike hides in the bushes and peers through binoculars at Sue in her new life. Both times he’s accompanied by his new pal Al (James Liao), a kindred, if caricatured, Asian American who works at his parents’ restaurant. But Aniston and Zahn by themselves easily manage to appeal as lonely hearts off by only a couple of beats. With Fred Ward, Margo Martindale, Yolanda Suarez, Kevin Heffernan. 93m. (Bill Stamets)