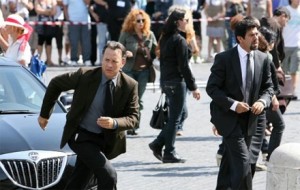 “Angels & Demons,” novelist Dan Brown’s 2000 bestseller, is adapted for the screen by the same screenwriter, cinematographer, editors, production and costume designers, composer and director for Brown’s “The Da Vinci Code” in 2003. Brown writes thrillers about centuries-old conspiracies, wherein Catholics kill Catholics to keep holy and unholy secrets. In the earlier film, Leonardo da Vinci encrypted clues in a painting that led to other clues of Jesus fathering a daughter whose current living descendant is a Paris cop on the cryptology beat. Isaac Newton was implicated. In this slick, risible film, Bernini encrypted clues in marble to direct church traitors to a secret subterranean meeting place. Galileo Galilei is drawn in. Both films are directed by Ron Howard and star Tom Hanks as Robert Langdon, a Harvard University “symbologist.” Although the Vatican banned Langdon from its archive when he researched his latest tome on esoteric scientists demonized by the church, he’s now called to decode arcane messages from whomever just kidnapped four cardinals, all contenders to replace a recently deceased Pope. The plot consists of Langdon pondering a lot of signs and symbols. In both films, he encounters ritually inscribed male torsos that convey portents. This time, his dark-haired female European sidekick is particle physicist Ayelet Zurer (Vittoria Vetra). And once again, she’s linked to a wise, white-haired mentor slain early in the first reel. The slayer in “Angels & Demons” turns out to be a contract mercenary-for-monotheists who stages bloody acts of sacred terror in the name of God, Allah and Yahweh, depending on which zealots are hiring him to exact vengeance. Each time our hermeneutic duo connects the dots, Hans Zimmer’s score thunders, cop cars with flashing lights speed through Roman throngs, and Langdon spots more signs to ponder. Easy to decipher are the onscreen numerals he cannot see: ten times we see what time it is. Until the clock strikes midnight. That’s when an Italian police helicopter makes a rapid vertical ascent, just like the Italian police helicopter at the end of Tom Tykwer’s “Heaven.” Blinking red lights on a dying battery inside a canister of antimatter cue a CGI light show over the Vatican that evokes one of Stan Brakhage’s more ecstatic hand-painted films. Standard action lines include: “Let’s hope the heavy-ion guys didn’t mess up.” The finale is an idiotic cascade of bad guys turning out to be good guys, and good guys turning out to be bad guys. Brown gets beat up by all kinds of experts and debunkers, but someone on “Angels & Demons” picked a Religion Technical Advisor with apt credentials for a script rife with clerical malfeasance. Records indicate that Reverend Dominic A. Scolamiero, former headmaster of a Roman Catholic high school in New Jersey, was indicted in 1997 on eight counts of stealing almost $300,000 from vending machines, scholarships and donations for disabled students and retired priests and nuns. He pled guilty to theft. With Ewan McGregor, Stellan Skarsgård, Pierfrancesco Favino, Nikolaj Lie Kaas and Armin Mueller-Stahl. 135m. (Bill Stamets)