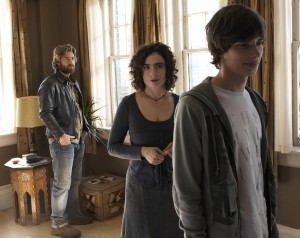 Bunkum overlaid with a rich patina of humbug, “Adoration” is the spectacle of an intelligent director spinning his wheels, a concatenation of tributaries that never assumes the effortless form and velocity of a river.

Atom Egoyan’s time-shattered eleventh fiction feature plays almost as a parody of his often fine earlier work, and in its use of the nondescript reaches of exurban Toronto’s Don Valley Parkway, with the peaking point of the CN Tower indistinct in smoggy near distance to left of frame or right of frame, he seems in hailing distance of working to combine the same-titled films of two Canadian peers, Paul Haggis’ “Crash” and David Cronenberg’s “Crash.” Urges and merging…

Simon (Devon Bostick) is a 15-year-old who invents a story in French class about his late father (Noam Jenkins), a home-wrecking Lebanese luthier who supposedly sent his Canadian mother (Rachel Blanchard) unwittingly to bomb a jet as a passenger. Each strand of the story is stylized in slightly different fashion, an approach that worked to haunting effect in “Exotica” and “The Sweet Hereafter” but not here. Simon lives with his angry tow-truck driver uncle (Scott Speedman) and he’s urged on by his teacher Sabine (Arsinee Khanjian) to persist in his falsehoods even as controversy erupts on the Internet and in school.

Egoyan’s groaning banquet table of concerns is ladled high with all but gravy-and-cheese-soaked poutine: a teenager’s fantasies, a teenager’s lies, terrorism, a grandfather’s xenophobia, exploding planes, abortion, anti-Semitism, anti-Arabism, “Capitalism vs. Terrorism” and, familiar to longtime observers of Egoyan, stalking, imagining oneself as part of a stranger’s life, the vitriol of chat rooms, border inspections and conversations that consist largely of repeated, interrogative questioning. Each character plays verbal ping-pong with identical spin. “Why?” “This surprises you?” I lost count of how many times the furriest, angriest character asked, “Excuse me?” to another adult character’s conversational style of pointed, rude provocations. (Still, those painful tics have nothing on “Adoration”‘s most unaccountable line, “Thank you! That was delicious! What kind of baloney was that?”)

The game Egoyan’s talked since the film’s 2008 Cannes debut is a good one, and he’s a transfixing explainer. Read some of them and you’ll be engaged and entertained: there are so many things he has to say to footnote and elucidate the failed project on screen. What he’s explaining, sadly, is less complex than merely strenuous, and at moments too camp to become offensive. In one of several chat-room sequences, an elderly woman reads her concentration-camp tattoo aloud while XTC’s “Dear God” plays on the soundtrack. Cut to Holocaust denier in the chat room in five… four… three… The chat-room bits play oddly, characters taking their turn as queued analysands, polite Canadians waiting their turn to spurt and blurt onto the virtual couch.

At the time of “Exotica,” Egoyan spoke of a discarded element of having customers at a club interact with exotic dancers via a touch-screen embedded in the table in front of them. The danger of telling instead of showing always lurks in his dramaturgy. While Egoyan broached the subject afterwards that the fractured time scheme of “The Sweet Hereafter” might have diluted its emotional impact, that film remains solid in its mercurial essence. But there’s nothing tangible gained here through the aggrandizement of superfluous editorial sleight-of-hand. It’s like a bomb went off in a knitting factory. A cut between a plane in the sky and an exploding SUV traffics in the kind of bogus, glib editing that Harvey Weinstein indulged in his trailer for “Exotica,” which cut from a quick shot of a rare egg strapped around a man’s waist to a drawer being opened that contained only a gun, leaving the impression the egg was a body-bomb. Egoyan’s earlier work is better than that.

The final shot of “The Sweet Hereafter,” which also boasts a brilliant, heart-wrenching extreme long shot of an orange school bus on blue-white ice falling through, is one of the most haunting and indeterminate I know. I can’t think of a single bit of visual filmmaking that matches that in “Adoration.” As for the title, allegory, allegory, hallelujah. Grafting “The Pied Piper of Hamelin” onto “Hereafter” works. But the figures of the Adoration of the Magi, which give the movie its title, remain elusive as metaphor.

As always, the Toronto-specific pronunciation, yes, including “out” and “about,” charms, as does the casual littering of the word “fuck” which seems as characteristic of Canadian cinema as anything else. The low clack of train on tracks under the scored end credits is lovely if confounding.