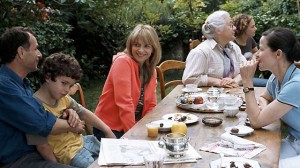 Oliver Assayas’ “Summer Hours” (L’heure d’été, 2008) is a mature masterpiece from one of the best filmmakers working today. I’m sure it can countenance all manner of rigorous analysis, yet its gentle touch belies how he’s masterfully woven all of his diverse themes and concerns in a seemingly simple telling of a family story. The man who made the memorably jangled, jangling twenty-first-century-in-the-making “Demonlover” (2002) and the fin-de-siècle turn of the twentieth century “Les destinees” (2000) and the ever-in-the-moment “Irma Vep” (1996) and “Clean” (2004) and “Boarding Gate” (2007) has combined, with the gentlest touch, these diverse pictures of varying success. A Renoiresque ensemble brings together a trio of fortysomething siblings to celebrate the seventy-fifth birthday of their mother at her home, lavish with objects and art. National treasures, national identity, the crossing of borders, the effects of globalization, are all implied in the course of discovering each of the characters. I want to see it again rather than reduce it to summary. Here’s a telling quote from Assayas about the former critic’s awareness of his own project: “It’s my own personal schizophrenia, but I’ve always felt like a sort of Taiwanese director working in France. When I started making movies, the preoccupations of Hou Hsiao-hsien and Edward Yang affected me, resonated with my own. Later, I became interested in the work of Wong Kar-wai and Tsai Ming-liang. With ‘Summer Hours,’ I return to very local material where there is a relationship to nature, time and modernity, the themes I share with Hou Hsiao-hsien.” Essential viewing. With Juliette Binoche, Charles Berling, Jérémie Renier, Edith Scob. Assayas’ usual cameraman, Eric Gautier, is on hand-held again. 102m. (Ray Pride)