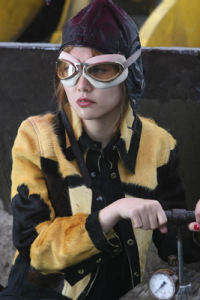 For his more ambitious second film, writer-director Rian Johnson goes beyond the single location of San Clemente, California of his 2005 debut “Brick,” an idiosyncratic spin on film noir. For his international con caper, “The Brothers Bloom,” he shoots in the Czech Republic, Montenegro, Romania and Serbia. “Brick” coined argot for teen crooks and their classmates; “The Brothers Bloom” creates orphan rivals who concoct detailed characters to play when they pull off baroquely finessed scams. The older brother is Stephen (Mark Ruffalo), a consummate storyteller who scripts personas for his younger sibling to assume. Bloom (Adrien Brody), though, wants free. He cries, “I want an unwritten life.” True to the genre, there’s that one last con. The duo target a New Jersey heiress with idle wealth. Penelope (Rachel Weisz) describes her only hobby as “I collect hobbies.” One of them is pinhole photography: “a photograph is a secret about a secret,” she says in her own meta-mode of making observations. Drawn into the brothers’ machinations, her role is more than a cog. Romance enters. She counsels her dear Bloom: “there’s no such thing as an unwritten life, just a badly written one.” Johnson indulges in a little over-writing by overlaying deception upon deception. “The perfect con is the one where everyone gets just what they wanted,” announces Stephen. “The Brothers Bloom” pays, if what you do want is a rollicking lark with witty lines and characters like an explosives connoisseur called Bang Bang (Rinko Kikuchi, “Babel”). With Maximilian Schell, Robbie Coltrane. Ricky Jay narrates. 113m. (Bill Stamets)