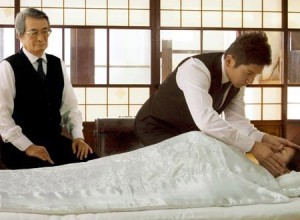 (Okuribito) The winner of the 2008 Academy Award for Best Foreign Language Film was a surprise. Scholars of Oscar choices and completists may find “Departures” a must-see, but others may skip this overly long, occasionally comic, conventionally sentimental tale of a laid-off Tokyo cellist who goes back to his hometown and finds a new calling. Daigo (Masahiro Motoki, once a singer in the band Shibugakitai) answers an ambiguously worded help-wanted ad: “departures” sounds to him like something to do with tourists. But it’s a euphemism for the rite of bathing, dressing and applying make-up to corpses in preparation for cremation. This intimate performance is done in front of mourners, usually at home. Deft handling of sheets, robes and garments keeps the deceased covered at all times. The ceremony is conducted with reverence, but specialists (called “nokanshi”) are stigmatized. Daigo’s cheery wife Mika (Ryoko Hirosue) is shamed by his new occupation, and leaves him. By the time she returns, carrying their first child, Daigo has bonded with his mentor and employer Sasaki (Tsutomu Yamazaki). Mika observes her husband at work, and transcends her revulsion. His skills will also help him heal his wound of his long-absent father. Director Yôjirô Takita and screenwriter Kundo Koyama depict a custom and a community that could inspire a more profound film. This one is undone by an outsized score by Joe Hisaishi who has composed for many films by Hayao Miyazaki and Takeshi Kitano. With Kimiko Yo, Takashi Sasano, Kazuko Yoshiyuki and Tetta Sugimoto. 131m. (Bill Stamets)