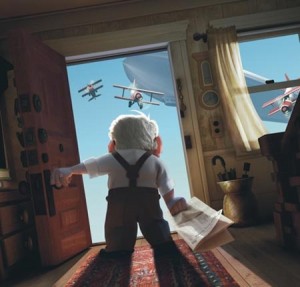 Pixar’s one stumble, “Cars” is reportedly the one that’s made the most money in product tie-ins, but one of their great virtues is letting directors run with passion projects and having their colleagues pitch in with their own inspired notions. While I’m keener on Brad Bird’s work like “The Incredibles” and his masterpiece, “Ratatouille,” “Up,” an improbable variation on Werner Herzog’s “Fitzcarraldo,” plays effortlessly, a grab-bag of comic tone and narrative ambition that works from epic to intimate, from tragedy to doggie goop on a tennis ball. There’s death, blood and a gaudy outsized bird (that caws with jungle obscenity), ranks of easily amused talking dogs and blue skies filled with anthropomorphic clouds and eventually, a world of marzipan-bright helium balloons. “Up” is filled with tidy renditions of Gilliamesque fancies. The comedy’s fleet and assured, sometimes hardly assertive: there’s an astonishingly simple joke in the last scene about color-blindness that matches the inspired use of “Squirrel!” throughout the adventure. And the widower at the middle of the picture is a grandpa every grandchild of whatever age can enjoy, down to his waking to an osteoporotic snap-crackle-and-pop. Ed Asner’s sclerotic yet avuncular growl is a treat. In an unlikely parallel inspiration to “Gran Torino,” the stowaway he takes under wing once his house takes flight is a young Asian-American boy. The 3-D effects are virtuoso even in ordinary settings; a dogs-in-aerial-combat sequence may be the best, and would likely make Charles Schulz very, very happy. 96m. (Ray Pride)