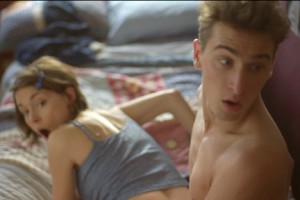 Jonathan Glatzer and Robert Lawson adapt a play they “originally developed” at Andy’s Summer Playhouse in Wilton, New Hampshire, for a pedantic film about heroes that ends with David Bowie’s song “Heroes.” Steve Coogan plays a New York reporter with a name made for a high school lit character, Campbell Babbitt, and enough boundary issues to fill a textbook on professional ethics. Assigned to cover the hometown angle of a local teacher about to board The Challenger in 1986, he arrives in her New Hampshire town on the day another ill-starred local teacher makes a fatal freefall from the roof of his apartment building. Suicide is assumed. His cultish students weigh the blame for the loss of their hero. Babbitt was a college friend of his, though out of touch for the past fifteen years. He finds himself taking his place in the eyes and hearts of mourning kids yearning for a new mentor and maybe lover. The filmmakers call this an “ensemble romantic comedy” but it’s more like a tangle of narrative threads that includes rehearsing for a school pageant to salute Christa McAuliffe in the NASA Teacher in Space Project, one teen aborting, a paraplegic losing her virginity (to Fenster Itkskicq, of all people), peeping on a breastfeeding neighbor, shoplifting fancy jeans and winning a Pulitzer Prize. By the end, the screen looks like a chalkboard of truisms about heroes. Indicative of the overcrowding is a roll call of 125 thank-yous in the end credits that includes Barack Obama. With Hilary Duff, Josh Peck, Olivia Thirlby and Molly Shannon. 107m. (Bill Stamets)