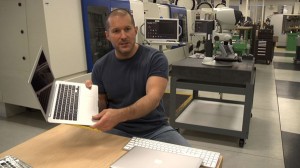 For his follow-up to “Helvetica,” the history of the influential typeface, Gary Hustwit says his ambition was to assemble designers and design experts and get them to talk about what they would talk about at a dinner party.

Since “Objectified” is showing this week at Siskel, you can at least accompany the result with a beer or a glass of wine. Hustwit makes a point in interviews and his blog that he’s an admirer but no expert in design: the movies are a way of finding out about things he wants to know about.

Working with Luke Geissbuhler’s gleaming HD images, Hustwit doesn’t dive into the myriad tributaries offered by the factors of contemporary design, something that would be hard to contain in a weekly series, let alone a brief film. He keeps “Objectified” lean, centered on descriptions of philosophy from the designers on screen. One thing that makes his HD production unusually lively, aside from the spirited figures he interviews, is his eye for B-roll, or the footage he uses to illustrate the points made by his succession of talking eggheads. A roster of a few of the luminaries: Alice Rawsthorn from the International Herald Tribune; New York Times Magazine contributor Rob Walker; Apple’s Jonathan Ive; Karim Rashid, and figures from the Museum of Modern Art, IDEO, the Walker Art Center, Muji-maven Naoto Fukaswa, Marc Newson and Dieter Rams. Even if you don’t know the names or the work, just enough information is dashed in to keep the aggregate conversation lucid and compelling. “Good design is as little design as possible,” Rams intones in German.

“The term objectified has two meanings,” Hustwit wrote on the film’s Web site. “One is ‘to be treated with the status of a mere object.’ But the other is ‘something abstract expressed in a concrete form,’ as in the way a sculpture objectifies an artist’s thoughts. It’s the act of transforming creative thought into a tangible object, which is what designers in this film do every day.” More a mash note than a comprehensive history, “Objectified” still elevates the attentions required to arrive at the simplest form as well as the contemporary trend toward creating sustainable products in both design and in eventual disposal.

A good example of the kind of eye candy for design enthusiasts is listening to Apple senior vice president of industrial design Jony Ive [pictured] in secretive Apple’s labs, with machining equipment used for on-site prototyping behind him as he shows the stages of fashioning the body of a shiny aluminum (or a-loo-many-um in his English accent) MacBook Air. Anyone remotely invested in Apple gadgets and gizmos will be eyes-wide at that point. And it’s also a pleasure to listen to one of the most influential of contemporary designers speak with simple eloquence about process and result.

It’s a more hopeful and positive vision of a globalized, designed world than Jem Cohen’s despairing “Chain,” as Hustwit intercuts at will between the streets of many cities. A point being made about mobile phones on sound will be accompanied by a shot in Manhattan followed by one in Tehran to one in Shinjuku, Tokyo.

Here are some simple images Hustwit captures as atmosphere: In an Apple store, a thirtyish woman with full brown hair has a lollipop in her mouth, paper still attached to the stem; a curly-haired girl sits on the shoulders of a shave-headed man with a goatee, rocking rhythmically back-and-forth in time to the understated, sleek score. A shot holds on a Target cash register as its red bull’s-eye logo screen saver caroms silently off its corners. A conversation about design that will last is illustrated by a dirigible at sunset over San Francisco’s skyline. A montage of drivers, a parallel to Tati’s in “Trafic,” watching encapsulated behaviors in isolation, is heightened by a quick, rhythmic punchline that is simple, dynamic editing. A close-up of “Gary”‘s cell phone at one point: “33 MISSED CALLS.” A silver-haired man with a professional’s still camera watches skateboarders from a bridge, London’s London Eye Millennium wheel turning behind his head; catching gleaming silver light; silver headphones attuned to his head. These are stories outside stories, inside a documentary. It’s a rich and rewarding approach. My favorite moment is filmmaking as simple pleasure: in slight slow-motion, a man in a pinstripe suit advances in profile along a city street, talking on his mobile phone, and behind him, the shimmery reflections off a transit shelter become visible just as a bicycle rider dream-streams past. All of which illustrate another keen phrase spoken in the film: “design dissolving in behavior.”

The ending, the last several shots, is simplest illustration of process, the process of making the film we’ve just seen, and the result is serene and apt.

“Objectified” opens Friday at Siskel. The “Designs for Living” series continues next week with “Rem Koolhaas: A Kind of Architect” and “Milton Glaser: To Inform and Delight.”