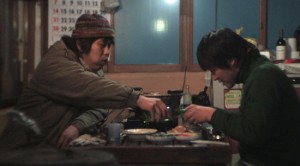 (Not Sool) Made for a reported $10,000, writer-producer-cinematographer-editor-composer-director Noh Young-seok’s deliciously controlled debut, “Daytime Drinking,” is a wonderful, semi-surreal black comedy road movie of escalating embarrassments that put the imaginations of any number of American “independent” filmmakers to shame. The scale of this dry gem is small: The drinking compadres of Seoul twentysomething Hyuk-jin want to take his mind off being dumped by escaping to an off-season mountain resort of Jeongseon in Gangwon province. They fail to show and Hyuk-jin’s left to his own increasingly messed-up fate as stranger after stranger proves to be strange indeed. (It’s the deadpan “Hangover.”) There are cultural parallels to Hong Sang-Soo’s melancholy romantic cock-ups like “Woman on the Beach” and “The Turning Gate,” but the film’s Web site (daytimedrinking.com) goes so far as to offer a whopping nine rules of Korean communal drinking, including how the ritual encourages “affection, camaraderie, friendship, and team spirit.” More importantly, you never fill your own glass. “A glass should be refilled as soon as it is empty, but never until it’s completely empty. If you’ve had your fill of drink, it’s important to not finish your current glass, or someone will most likely refill it.” The complications, embarrassments and mortifications in “Daytime Drinking” are a glass that’s constantly being topped off. With Song Sam-dong, Yuk Sang-yeop. 116m. 35mm. (Ray Pride)