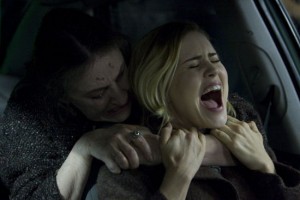 Sam Raimi’s made three of the most expensive movies ever made, utilizing terabyte farms of huge dimension to produce the teen anxiety comic adaptations of the “Spider-Man” series. But does his beating artistic heart lie more in productions like his “Xena” television series, or in the “Evil Dead” movies, made with little more than rude good cheer? In the case of gob-of-schlock “Drag Me To Hell,” Raimi demonstrates he’s still up for a game of vomit and nosebleed and mucus and drool and flies and formaldehyde, and the never-aging Alison Lohman (verging on 30) also demonstrates a willingness to embrace indignity with verve. Is this my cup of pus? Only in its dynamic widescreen velocity: it’s a tsunami of oddly playful grue. Whether you’re boo’ed! or given nightmares depends on your own constitution. Lohman plays Christine Brown, a young bank officer (and vegetarian-oh-oh) desperate for a promotion who turns down an old woman’s request for an extension on her defaulted loan. Curses ensue, no bailout in sight. With Justin Long as her snarky boyfriend, a figure almost as horrid as the clichéd Eastern European crone; Lorna Raver, Dileep Rao, David Paymer, Adriana Barraza. 99m. Anamorphic 2.40 widescreen. (Ray Pride)