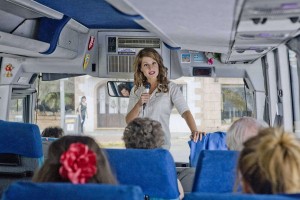 Eight minutes in, I wanted out of this comedy about an American in Athens that teeters between numbing and maddening in its inanity. In “My Big Fat Greek Wedding,” Nia Vardalos wrote herself into the lead role and narrator, a 30-year-old unmarried Greek-American who blossomed as an Internet-literate travel agent after taking a computer class at Truman College, and who found a long-haired husband. Now she plays a libido-stuck ancient historian on career hiatus as a guide at Pangloss Tours who falls for a long-haired local. As Georgia, she narrates her plight dealing with a cartoon-load of American, Australian, English, and Spanish stereotypes on a bus driven by the oddly silent Procopi Kakas (Alexis Georgoulis). The foreigners titter over the sound of his surname, much like the schoolgirls in “My Big Fat Greek Wedding” reacting to the name of a Greek dish that sounded like “moose ca-ca.” The script by Mike Reiss shows far more structure and momentum than the one that earned Vardalos an improbable Oscar nom for “My Big Fat Greek Wedding.” Nonetheless, the arcs of initially disgruntled one-note characters towards a smiley chorus of acclaim for their guide is insufferably trite, as directed by Donald Petrie (“Welcome to Mooseport,” “My Favorite Martian”). With Richard Dreyfuss, María Ádanez, Sheila Bernette, María Botto, Rachel Dratch, Alexis Georgoulis, Ralph Nossek, Bernice Stegers, Harland Williams, Alistair McGowan. 98m. (Bill Stamets)