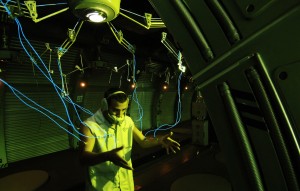 Alex Rivera’s debut feature, “Sleep Dealer,” winner of the Waldo Salt Screenwriting Award and the Alfred P. Sloan Feature Film Prize at Sundance 2008, is an independent science-fiction low-budget movie, an allegory set among Mexican workers that does not lack for ambition or invention. Immigration… outsourcing… “the war on terra”… big government? Check, check, check, check. Much like the devices in “The Matrix,” and taking off from the borderline “maquiladora” factories of today, “Sleep Dealer” (written with David Riker) proposes a globalized economy with closed borders but with workers in countries like Mexico working sweatshop-type jobs in factories in the U.S. “The American dream: all the work, without the workers.” Rivera is one of a promising group of emerging directors in early career who are reaching farther: Duncan Jones’ sly sci-fi parable, “Moon,” opening later this month, works with similar passion and compassion in what is superficially genre form. Following one worker (who’s already being followed), Memo Cruz (Luis Fernando Peña), a displaced Oaxacan hacker, Rivera’s thriller ably suggests a future that could readily emerge from what we think of as “now.” Details are more gritty than slick, providing an industrial verisimilitude that would not be out of place in an outraged documentary like “Food, Inc.” (opening later this month). Lisa Renzler’s fine lensing is a plus, as is tomandandy’s jangly score. 90m. (Ray Pride)