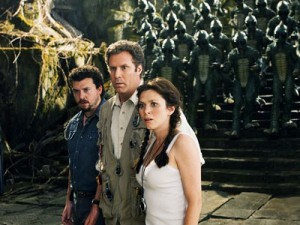 In his worst motion-picture product to date, Will Farrell plays Dr. Rick Marshall. When amazed, he exclaims: “Sweet Gregor Mendel!” and “Captain Kirk’s Nipples!” Pooh-pooed as a “quantum paleontologist,” he’s reduced to fielding this question from a kid (Bobb’e J. Thompson) on a field trip: “If you shot a ton of pot at the sun, would everyone get high?” In a career downslide, the ex-scientist stuffs his face with donuts stuffed with M&M’s. Then he is perked up by Holly (Anna Friel), his starstruck sidekick, as in she was kicked out of Cambridge for taking his side. He tweaks his tachyon amplifier that zaps them through a time-space warp into a land with three moons, dinosaurs, missing-link hominids, and hallucinogenic flowers. The landscape includes a Cessna crashed into a Viking vessel, a Hummer stretch limo, and an ice-cream truck. Chris Henchy and Dennis McNicholas script a plot about thwarting a dominator of all time & space, and then zipping back through the warp. This all started in 1940 when Sid Krofft saw “One Million B.C.” That inspired him and his brother Marty to create a Saturday morning TV series called “Land of the Lost” in 1974. Brad Silberling (“City of Angels,” “Casper”) directs this dreck with no parodic panache. With Danny McBride, Jorma Taccone and Matt Lauer. 93m. (Bill Stamets)