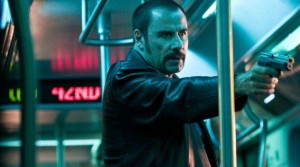 Cinematographer Tobias Schliessler is as much the star of “The Taking Of Pelham 1 2 3” as Tony Scott’s ongoing star, Denzel Washington, photographing the streets and subway tunnels of New York City with gleaming, candied delight. It’s like “The Warriors” fatted to foie-gras butteriness. Some of the elegantly lit shots have the same daring as a movie like “Three Times” or “Millennium Mambo,” parallels that seem unlikely unless you take the tack that Scott is the subversion action painter of big-budget thrillers. Can you be an elegant vulgarian? (Most certainly.) The script by Brian Helgeland, adapting the novel the 1974 film of almost the same name was based upon, about the hijacking of a subway train in Manhattan, is rife with swears, tasty dialogue and occasionally plausible plot twists. (John Travolta unleashes a wide and diverse range of “motherfuckers” for those who cherish such things.) Washington is stolid and stout as the dispatcher who engages the tattooed and profane Travolta. For production reasons, action films often end with mano-a-mano’s between good and bad in confined spaces like disused factories. Scott manages to breathe the open air of the great out-of-doors in his movies as well as consistently designing the most exhilarating palettes in wildly scaled megadecamillion-dollar studio productions. James Gandolfini is sharp in a brief role as a New York mayor who’s part Bloomberg, part Giuliani (“I left my Rudy Giuliani suit at home.”) With Luis Guzman as a henchman and John Turturro as a hostage negotiator. 121m. Anamorphic 2.40 widescreen. (Ray Pride)