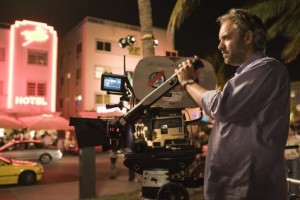 How do you become a couple? By learning from the quirks of others and embracing your own. In “Away We Go,” a winning, earthy comedy directed by Sam Mendes and real-life couple, the novelists Dave Eggers and Vendela Vida, a pregnant couple in their early 30s, Burt (John Krasinski) and Verona (Maya Rudolph) hit the road to find home. Their friends have settled around the continent and into their own idiosyncratic lives, and the result is like “Christmas Carol” refashioned as a road movie: here’s the ghost of family past, learn from it. The couple nurtures each other, and they’re so much insufferable as beyond reach, as they fashion the protective and nurturing self-centeredness of coupledom for themselves. “Burt, are we fuckups?” They’ll spend their live wondering, together.

On a doused spring afternoon in Chicago, a cloudburst just ended. “I’ve been here before, making ‘Road to Perdition,'” Mendes says as we admire the sky through an open hotel window. “But that was in the middle of winter and I froze my balls off!”

An unlikely reference came to me watching the movie, something Anthony Burgess observed. He said that he always felt grief when he saw a couple break up. It was the end of a language, a built language, a secret language that only ever existed between two people that was suddenly extinct. And I thought about that with this film. One of the niceties of “Away We Go”‘s script is that the couple is at the start, in the middle, of creating that language.

“Yeah, yeah,” the voluble 43-year old director says, laughing. “That’s very brilliantly put all ’round. How ironic, that Burgess, a man who invented languages on his own, should talk about the secret language of couples. If you ever read, obviously, ‘Clockwork Orange,’ but he wrote an incredible novel called ‘Nothing Like The Sun,’ basically, in a sort of Elizabethan doggerel. It’s incredible. I mean, the guy was a fucking genius. I mean, really extraordinary. And you’re right; one of the things about the film is that it’s written by a couple. If you have a real, powerful secret world and very vivid imaginations-both of them writers-writing something to make each other laugh on the sofa when Vendela is pregnant with their first child. I have this image of them sort of stuck in the house and because they’re writers, not knowing what to do. ‘Hey, let’s write!’ You know what I mean? I have a sort of non-writers jealousy of writers always. You meet real writers, who spend their life writing…”

They bring something out of the room that didn’t exist before. “Exactly! You sit in this empty room. I can’t do that. I’m a collaborator; I thrive and feed off the energy of others. In this case, I just felt that, that secret world of Burt and Verona, and y’know by inference, of Dave and Vendela, even though they’re totally different characters, by the way, they’re not the same, I mean, they’re not writing about themselves. Because Dave and Vendela are so sorted and so motivated and these guys are lost. But, that secret language of a couple is something that’s there in the film and I’m pleased that you point out, because you’re right.”

There are other glimmers, like the hints of Burt’s ongoing breast fixation. Mendes laughs. “There was a little more in there, but I cut it out!” She tolerates him. He tolerates her. “It delights me that you mention these things because of course they’re so lightly touched on, that they’re not hammered. I think that happens a lot in the film, is that things are just sort of very… I tried to find a visual correlative for the way Dave and Vendela had written it. The movie creeps up on its themes, it doesn’t state them overtly d’y’know what I mean? To find a visual way of doing that onscreen, you know what I mean, so that things are just thrown away that you hope they’ll land, reaction shots, moments, looks, those sorts of things.”

The themes aren’t overt. “What’s interesting [is we’re] not creating a contrivance where both characters, there’s some spurious conflict between the two of them. The tradition in romantic comedy is basically boys meets girl, falls in love, then something goes wrong-”

And how do you keep them apart? “Yeah. The second-act crisis is something goes wrong, they’re parted and then boy runs through rain to rescue girl and it all ends happily ever after, basically. This is completely opposite; they’re treated as a unit. They’re treated as a single entity. It’s taken as read that they love each other. There is no crisis. What they do, then, is turn them out to face the world, y’know, and create a road movie for them. I felt like I was looking at bits of two genres, there’s bits of romantic comedy and there’s bits of road movie in it but it’s neither, absolutely.”

“Away We Go” opens Friday.