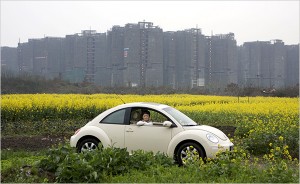 Zia Zhang-ke continues his dreamy meditation on contemporary China. Blending fiction and documentary in a slightly bolder fashion than in recent work like “Still Life,” “Dong” and “Useless,” Zia’s parable of China’s turn to capitalism and its discontents is captured through the story of a factory’s closing in remote Chengdu City, capital of Sichuan Province, which suffered the overwhelming 2008 earthquakes (after this film was shot). The former munitions plant is to be razed for “24 City,” an up-upscale high-rise clutch of condos. Workers from the factory talk about their lives; some are actors, others are not (reportedly, five are verite and four are scripted, with a recognizable Joan Chen filling one role). Shots of them leaving the factory evoke the early gaze of the Lumière brothers. “Surrealism is a crucial part of China’s reality,” Zia said in a Film Comment interview. Poetry, too, with verses by Yeats invoked. His high-definition images boast uncommon clarity, a sweet irony, considering the ambiguity “24 City” seems to hold both future and past within. Yoshihiro Hanno’s score is especially beguiling in montages of the factory’s slow disappearance. 108m. 35mm. (Ray Pride)