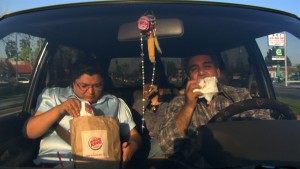 Robert Kenner’s unsentimental yet reserved “Food, Inc.” is a portrait of contemporary food production that will surprise no one who has read Eric Schlosser’s “Fast Food Nation” or Michael Pollan’s “The Omnivore’s Dilemma,” yet in its ninety-four-minute running time, it manages to capture enough material for a dozen documentaries, or if public television were what it once was, a weekly series that would run for months. There’s a busy-ness of animation and graphics to make many points in this activist doc, but, as Kenner said in an interview in the current Cineaste, “We all know there are disgusting things. Listen, the fact is, we’re totally removed from where our food comes from. I made a point of trying to remove any gross-out scenes. I felt like that they weren’t going to teach us anything new and would only keep people away.” Even with that decision, “Food, Inc.” presents a monolithic world of quiet control over the food supply, with aerial views of “chicken houses” in rural Kentucky (pity the water downriver) followed by the feathered vista of throbbing factory-bound poultry reaching to indoor horizon. Wal-Mart’s the only company that allows representatives on screen. “Smithfield declined to be interviewed for this film. Tyson declined to be interviewed for this film. Monsanto declined to be interviewed for this film,” is the doc’s effective refrain. Still, Kenner allows for some uncertainty about the factors at hand, not stooping to caricature where it would be eminently possible. A feeling of despair is inescapable even with a closing call to arms scored to Bruce Springsteen’s rendition of “This Land is Your Land.” As a Senator put it recently, regarding the possibility of universal healthcare, which he absolutely ruled out, citizens don’t have votes and citizens don’t have a say in the Senate. Just 100 Senators who thrive on corporate contributions and who, along with their staffs, shuttle back and forth from industry to politics, quietly demolishing public safety. “Food, Inc.” is co-produced by Participant Productions (“The Inconvenient Truth,” “The Soloist,” “Standard Operating Procedure”), founded by billionaire Jeffrey Skoll and distributed by Magnolia Pictures (“Outrage”), co-owned by billionaire Mark Cuban. Can only the super-rich look upon the super-rich? 104m. (Ray Pride)