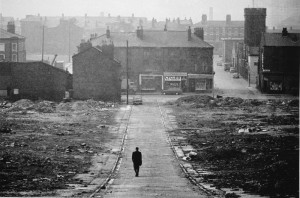 A passage in Terence Davies’ only published novel, “Hallelujah Now”  (1984), reads, “Yes, they are all there. I can summon them up from the empty house, from the shuttered rooms, from the staircase creaking into silence, from the wind blowing around the moon. From the frail, dead dark they came-my family and me-in a stately, courtly, purple cavalcade. Softly, very, very softly all my ghosts begin to chatter and cough, murmuring in the cold damp dark.” This chatter, cough and murmur elevates to song and hymn in Davies’ most memorable films, including “Distant Voices, Still Lives,” and now, “Of Time and the City.” The elliptical, memory-drenched style the writer-director has nurtured remains a constant in his produced work. Davies hadn’t been able to get any projects made since 2000’s able “House of Mirth” and the frustrating break of eight years in between was finally broken with this documentary commission, a montage built largely from archive footage, of Liverpool, the city he’s from and the lost era that much of his work is steeped in. The most persuasive comment I’ve read about this tender feuilleton, narrated by Davies in his wry, plummy actor’s voice, often drawing from poets, would be from former Granta editor Ian Jack, who wrote in the Guardian that “One of the persuasive hallmarks of Terence Davies’s films is that they recreate childhood as adults remember it, as sweet and occasionally sour fragments of a departed life.” That air of recall suffuses “Of Time and the City,” a lyrical work that incorporates imagery of a Catholic, working-class Liverpool upbringing with music and texts favored by Davies. It’s a curious, singular autobiography of an imagination, which audiences may find touching or insufferably sentimental amid its caustic, reactionary patches. 74m. 35mm. (Ray Pride)

“Of Time and the City” opens Friday at Siskel.