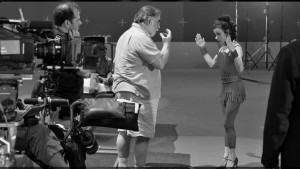 Francis Coppola calls “Tetro” the second film of his second career. At the age of 70, he’s paid off his vast financial debts from the time of “Apocalypse Now” and “One From The Heart,” built a winemaking empire, and settled down to make the films that strike his gilded fancy, claiming not only does he not want a career, he doesn’t have one. Hearteningly odd, sometimes naive and categorically operatic, “Tetro” pits brothers against brothers and fathers against sons in a contemporary Buenos Aires setting. Formally, “Tetro” is an eyeful. The digital black-and-white cinematography by Mihai Malaimare Jr. (“Youth Without Youth”) is chock-a-block with visual niceties, including a feel for the streets of the Boca neighborhood that resembles work like Helen Levitt’s street photography and certain neorealist films, a gleaming notion of urban night, and a willingness to work almost only with static camera angles that are sometimes eccentric yet seldom without interest. Alden Ehrenreich plays Bennie, a young man in search of his older brother, who has turned his back on his family and adopted the name Tetro, a short form of their surname, which can translate as “gloomy.” The aptly named Gloomy is played by Vincent Gallo, moving and crouching with coiled paranoia and occasional outbursts of joy. (His retort when Bennie impersonates him: “Hey! Don’t do me. Do you. I’ll do me.”) Maribel Verdú plays Tetro’s girlfriend, a supportive Porteño doctor-turned-dancer, and in the film’s Fellinesque ending, Carmen Maura plays an influential cultural critic- “South America’s most important!”-who calls herself “Alone.” (It is that kind of movie.) Coppola’s interested in the transformations that figuratively kill not only Father but Mother. His diversions also include a handful of stage-set scenes in Powell-Pressburger-like color. If you want filmmakers to mature into nestling in otherworldly imagined places, Coppola makes family and B.A. and Patagonia into strange and beguiling places. Walter Murch edited and did the sound design, or “re-recording”: his evocation of echoing sounds from the streets of the city are slightly heightened but narcotic in specificity. Hardly profound, “Tetro” is still an accomplishment as writer-producer-director-financier-distributor that almost no one else of his generation would engage. (The film’s Flash-heavy Web site, tetro.com, has a wealth of background information.) 127m. Anamorphic 2.40 widescreen. (Ray Pride)