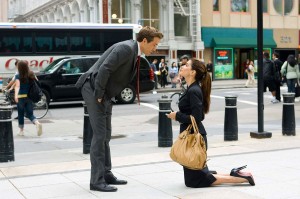 Sandra Bullock plays another hard-driven pro without a love life. Emotionally rough around the edges, she endears as Margaret Tate, a tough, feared Canadian editor at a New York City publishing company. To stop novelist Don DeLillo from jumping ship to rival Viking Press, she traveled to the Frankfurt Book Fair, thereby violating her visa. To keep her job, she instructs her abused young assistant Andrew Paxton (Ryan Reynolds) to marry her if he wants to keep his. The immigration investigator (Denis O’Hare), who keeps a copy of “U.S. Citizenship For Dummies” on his desk, warns Andrew that he faces a $250,000 fine and five years in federal prison if he fakes a marital union. Off they go to Alaska for the ninetieth birthday of Andrew’s grandma (Betty White). Suddenly a wedding is scheduled. Bullock is an executive producer of this romantic comedy about a career gal put in her place by a guy with a daddy issue. Director Anne Fletcher (“27 Dresses”) works in an old-school style that pays off. In the genre’s obligatory face-to-face climax in front of onlookers—the entire department run by Margaret—the couple overcomes the obligatory last-minute obstacle and pronounces their commitment to a happy ending. “Show her who’s boss, Andrew!” hollers a male underling from his off-camera cubicle. Writer Peter Chiarelli’s best lines put her down. “This woman is about as subtle as a gun,” observes an Alaskan. Andrew suggests his faux fiancee “stop snacking on children while they dream.” Bullock likes the fetish look for her character made by costume designer Catherine Marie Thomas, who lists her hometown as “Hyde Park, Chicago”: “her armor-the tighter, more severe, cinched and hardened, the better,” she says in the press notes. At the opposite end of her four-inch heels, her face is made-up in hues of hardwood. “The Proposal” is a winning shuffle of “Green Card,” “The Devil Wears Prada” and a coastal chase from the last reel of “Made of Honor.” With Malin Akerman, Craig T. Nelson, Mary Steenburgen, Oscar Nuñez and Aasif Mandvi. 108m. Anamorphic 2.40 widescreen. (Bill Stamets)