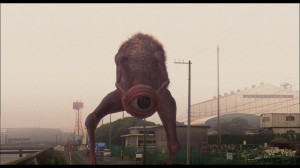 A deadpan mockumentary on Japanese superheroes, Hitoshi Matsumoto’s “Big Man Japan” (Dai-Nipponjin, 2007) is one more raging oddity from Japan. Masumoto, a well-known local comedian, stars and co-writes as well as directs. Daisato battles monsters, but in order to grow into a huge giant and gain his powers, he has to charge himself up via his nipples. Yup. It’s Ultraman for a less confident century. Masumoto’s deadpan is his great strength, making what could have seemed a parallel to Peter Berg’s “Hancock” into something much, much funnier. And strange. And hilarious. And really strange. Daisato’s an everyman, too. An everyman salaryman who battles monsters. Ah, perchance to dream. 113m. (Ray Pride)