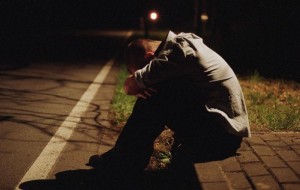 In each of his features, telling his stories at great velocity, with running times seldom more than ninety minutes, Christian Petzold and his cinematographer Hans Fromm’s sense of sturdy composition and clear-eyed sense of light on landscape (most recently economically backward reaches of East Germany) transfix the eye. Working largely in sunlight, his images gleam, like literal representations of watercolor renderings or stage design. What confines his characters, however, is not the near-formalism of the filmmaking, but a reduction of their behavior to physical gestures and compulsive repetitions. Emotions seethe under his actors’ impassive surfaces. “Jerichow,” the name of a village west of Berlin on the River Elbe, is where Thomas (Benno Fuermann) returns for his mother’s funeral. Family conflicts that turn violent quickly sketch the mindset of a character we will later learn is a dishonorably discharged Afghanistan war veteran and the middle-distance way Petzold observes his characters. While working on a more metaphorical level than Bresson, Petzold pares performance down, especially with Thomas, whose tense back and coiled expressions tell us more than psychologically derived dialogue might. But the effect allows the movie to breathe: I wouldn’t want to make “Jerichow” sound airless, oppressive or without genuine empathy. Petzold’s variation in this case is on James M. Cain’s “The Postman Always Rings Twice,” with a chance crossing of paths with Ali (Hilmi Sozer, whose intricate performance teems with melancholy and resigned self-awareness), a Turkish-German owner of forty-five doner kabob shops. A drunk-driving charge and a suspended license leads Ali to offer the endlessly humiliated, simmeringly resentful Thomas a job as his driver. When we meet Ali’s wife Laura (Nina Hoss, from “Yella”), the die is cast. Cain’s Greek restaurant owner is now a Turkish-German entrepreneur. Sexual, political, class and racial issues are implied in the first fleet collision of the characters, and an audience’s response is calibrated by Petzold so that we have the room to muse on such things as why two Germans would or should begin an affair behind a Turkish husband’s back: ugly frictions reside in each crossing of glances. It’s familiar and heartening melodrama from Petzold, who is also a keen student of his late German forebear, Fassbinder, down to small bites of the color red, ghostly manifestations, crossed boundaries and terse dialogue that takes history and fate on each character’s anxious shoulders: “You can’t love if you don’t have money, that you know.” (Ray Pride)