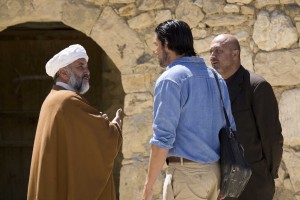 “Voices of women do not matter here,” Zahra (Shohreh Aghdashloo (“24,” “House of Sand and Fog”) tells journalist Freidoune Sahebjam (Jim Caviezel, “The Passion of the Christ,” “The Thin Red Line”) who is passing through her mountain village in Iran. “I want you to take my voice with you.” This issue-oriented docudrama unfolds as a flashback told over a long afternoon as the Paris-based, Farsi-speaking visitor waits for his car to get repaired. Director Cyrus Nowrasteh and his co-writer Betsy Giffen Nowrasteh adapt Freidoune Sahebjam’s 1990 book about the 1986 stoning of Soraya, here played by Mozhan Marnò (“Traitor”). Her abusive husband falsely accused her of adultery so he could marry another woman. With the collusion of the corrupt local mullah and a coerced witness, Soraya was stoned to death by her village. Her father, husband and elder sons threw the first stones. Sahebjam heard of the incident when he passed through the unnamed village while on assignment for Paris-Match, working on an unrelated report on satellite listening dishes installed near the Pakistani border. Nowrasteh-who earlier wrote the television docudramas “The Day Reagan Was Shot” and “The Path to 9/11”-ratchets down the evil Sahebjam recorded. This harrowing expose of fundamentalist justice is daunting fare, even as Nowrasteh spares us the sight of the victim’s brains spilling from her skull and stray dogs feasting on her decapitated corpse. With Navid Nagehban, David Diann, Ali Pourtash and Parviz Sayyad. 116m. Anamorphic 2.40 widescreen. (Bill Stamets)