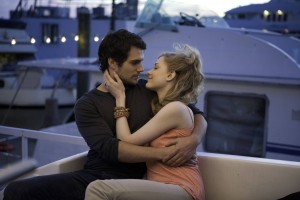 Or, “doesn’t work” as the case may be. Waxworks filmmaking of intermittent animatronic voltage, Woody Allen’s fortieth feature, “Whatever Works,” is reportedly a long-shelved script he’d written for the late Zero Mostel back in the era of “Annie Hall” and “Manhattan.” “The Meanest Man in the World,” it was called. Allen’s claimed in the past not to have castoffs; there are few clues to the present day, although a line of voice-over does invoke President Obama. It’s another February-December romance in which the overbearing Manhattan motormouth and egotist Boris Yellnikoff takes in chicken-fried runaway Melodie St. Ann Celestine (Evan Rachel Wood, who finds music in her character where Allen has provided little or none), whom he dubs a “sub-mental baton twirler” but eventually takes into his bed and marries. Larry David handles the mouthpiece chores here, reciting garrulous harrumphs of abuse directly to the camera; the prolix bursts, studded with calls to bring down the “sub-mental inchworms” and “pygmies” of society, do indeed sound like a first draft from oh-so-long ago, and the self-realization clichés in store do sound very, very 1970s. With Patricia Clarkson as Melodie’s mother, who discovers her inner artist, and Ed Begley, Jr. as Melodie’s father, who discovers his inner gay man. Nuance does not abound. With Michael McKean. 92m. (Ray Pride)