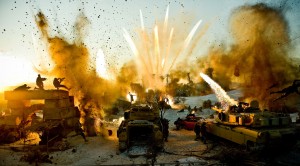 “Earth. Birthplace of the human race.”

And Michael Bay, too! Dear Lord. What is this farrago called “Transformers: Revenge of the Fallen”? A Monday night screening offered two-and-a-half-hours of pummeling, lashing, transformation, goop, goo, fairy dust in a tube sock, simulacra of human behavior and agreeable air conditioning. In another narrative (equally without consequences) the only fair review of an indigestible mess like this would consist of two words: “I Quit.”

But fortunately, not all movies are made by the redoubtable Mr. Bay, more farrier than auteur. There are other pictures in the world, some films, occasional cinema, they’re just not on the 4,200 screens this weekend that host “Transformers Deux.” Ah, if only the project lived up to its half-an acronym, “T: ROTF,” but, sadly, it neither literally or figuratively lives up to the “LMAO” that should follow. “T:ROTF”‘s grosses should goose the bottom line for both Paramount and DreamWorks. Think of it as a WPA initiative for out-of-work pyrotechnicians.

Shanghai is under attack. Decepticons want to end our world! Battle ensues. Things blow up. Get cut in half. Pirouette in rude violation of gravity itself. Things blow things up. Terra firma: Sam Witwicky (Shia LaBeouf) is going off to Princeton. His parents, Ron and Judy Witwicky (Kevin Dunn and Julie White), are at a loss. (Later, we’ll be at a loss when they keep popping up wherever Sam jet-sets off to.) Sam carries a single U-Haul carton around for several scenes. His yellow Camaro Transformer, Bumblebee, is consigned to the garage. Bumblebee sad! Sam’s girlfriend Mikaela Banes (Megan Fox) teases him with abandonment but always kittens back to him. She’s introduced on the back of a motorcycle, to put it demurely, face down and ass up, her Daisy-Duked bottom making an offering to the skies above. When Mikaela comes over to his house, Bay and cinematographer Ben Seresin jiggle the camera up and down her form as she makes a desultory strip off to a shred of a rag of a slip of a dress.

Then shit happens. Then some more shit. Oh, lots of shit, coming and going. Bay makes a hapless attempt to capture the mayhem of “Gremlins 2″‘s havoc, but Joe Dante is among the fleet of directors he is not. Sometimes it’s fun to flex, to seek out moments of fleeting beauty in a scrapheap or even to defend a bombastic monstrosity out of rank perversity. The impulse is quickly stilled. (And only 130 minutes to go!) This is not your little brother’s digital narco-anime, only a crass, overbearing, long-winded, witless exploration in economic transaction. God bless this film for all the jobs it provided during its production and in his first week overseas, where it’s a highly profitable emissary for truth, justice and the American Bay.

An early dolly-counter-dolly shot deliriously moves around the pair and exemplifies Bay’s style of post-cinematography: it’s done with such headlong abandon and divorced from the content of the scene that somewhere Brian DePalma is getting an inexplicable erection.

Not having worked with a stopwatch, I can’t be sure, but “Skids” and “Mudflap,” a pair of Heckle-and-Jekyll autobots (one with a gold tooth in its grille), may have almost as much screen time as LaBeouf. Chitlinbots? Jar-Jar Bots? It’s as if Bay had given up hope of being the mislaid son of John Frankenheimer and moved on to being Keenen Ivory Wayans’ long-lost cousin.

Among other excursions into the witless are invocations of 9/11, shots of flag-draped coffins, repeated Taserings as physical humor, a 360-degree shot of John Turturro in a jockstrap, a “Cloverfield” poster with its decapitated Statue of Liberty and a “Bad Boys II” poster that a going-mad Sam decorates with alien symbols that have taken residence in his brain. The mass deaths are not sanitary: bodies fly, fall, burn, drown. Sam’s Camaro also roughs up, punches and slimes a forward young woman. Ejaculate? Exactly. Febrile post-adolescent sex terrors abound. In the boisterous sound mix, odd lines of off-screen dialogue rise up at regular intervals: “Boy, somebody shit in the bed this morning”; a line straight from “Idiocracy,” “Ow! My balls!”; “Mean robots suck”; and Turturro’s greatest moment, “Gentlemen, I am positioned under the enemy’s scrotum!”

There’s a lot of imagery of slithering and bodily violation, with the creatures spewing and slathering disagreeable fluids, including a college girl who manages to seem even more perma-tanned than Megan Fox. She’s the one in the short summery dress who turns out to have designs on… our young hero’s intestines? Or something. The movie’s excesses garner only a PG-13, so I imagine that Bay was prevented from giving the machine-monster revealed to be wearing dainty cornflower-blue panties the moniker of “Decepticunt.”

A self-immolating self-satire with no sense of proportion, “Transformers: Not ROTFLMAO” is a decadent proposition: throw everything you have at the wall and when it sticks throw the wall at another wall, grimace, repeat, blow up a Pyramid when you have a sec.

“Transformers: Rise of the Fallen” is now playing on more than 4,200 screens, including IMAX, which has as much as forty percent more image area to accumulate debris.