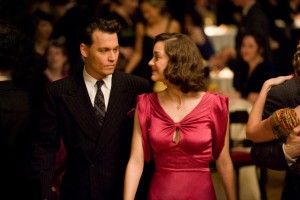 Some movie reviews don’t want “Public Enemies” to be the film that it is.

“Time is luck,” a character says in “Miami Vice,” and that’s become a deep theme in Michael Mann’s carry-case of notions about work, rivalry, crime, law and how masculinity is defined by men in action. Even more so than in earlier films, “Public Enemies,” a portrait of the last short sharp burst of independent criminals like John Dillinger (Johnny Depp) robbing banks in the midst of the Great Depression, Mann works from implication more than explanation. There’s a keen subplot involving the high-tech of that moment, as eavesdroppers etch acetates of captured conversations, as well as parallels with government’s tendency not to waste a crisis, as J. Edgar Hoover (Billy Crudup) inflates the threat of interstate crime as a rationale to elevate the Bureau of Investigation into a federal crime-stopping force at his command.

“Create informants, Agent Purvis,” Hoover tells the agent (Christian Bale, as sleek and expressive as a fine topcoat, features as crisp and stern as the brim of his fedoras), assigned to take down Dillinger. “Suspects are to be interrogated vigorously.” Crudup snaps that word. “Grilled. No obsolete notions of sentimentality. We are in the modern age, and we are making history. Take direct, expedient action. As they say in Italy these days, ‘Take off the white gloves.'” There’s a complex weave of history and commentary there.

But largely, character’s revealed through action, and there’s a lot of it. In the past decade, Mann’s become more of an explainer when he talks about his work, less fearful of being caught not only as a Chicago collector of a cohort of colorful characters on both sides of the law, but of being a full-on maker of images, of instants, of sensation, of cinema. The explaining happens when Mann himself frames the picture for interviewers. Here’s a slightly condensed, prototypical rush from Mann, drawn from a conversation last weekend with John Patterson of the Guardian: “The movie I saw in my head, the movie I wanted to make, had to do with this kinda wild guy who wants everything, and he wants it right now, with this passion. And he doesn’t just get released from prison, he explodes out of the landscape, wanting everything he hasn’t had for ten years with all the power and force of his personality and his skill-sets. And he launches this unique ride, this white-hot trajectory, three or four lifetimes’ worth of dynamics crowded into one lifetime that, finally, is only thirteen months long.” Mann himself had long worked on stories that cover characters from this era for more than thirteen years, and in each engaging extended parlay he’s given, he raps out his own giddy rush. “Skill sets” is the lingo of a man long fascinated with “high-line” thieves but “white-hot trajectory” is the gab of a producer-director who knows that his steely yet lyrical work needs to be sold like, well, a gangster picture. Even in the smallest roles, the casting brings further snap and sizzle, with an agent played by Stephen Lang and Marion Cotillard as Billie, Dillinger’s steely waif of a moll, as particular standouts. (Her hooded doll eyes and slightly pudgy nose suit the era but have a timeless roundness as well.)

I stray from synopsis because “Public Enemies” does a wonderful thing: it evades plot. It eludes summary. Mann and his co-writers Ronan Bennett and Anne Biederman assume we know the particulars, not only of how 1930s gangsters mirrored the movies that romanticized them, but also of how crimes got committed. Taken as story, the movie may seem overstuffed, but it’s not story that Mann’s after, but the sense of that “white-hot trajectory” pictured in the enigmatic parsing of surfaces captured in bold high-definition video by Dante Spinotti, a great shooter of film who’s inventive with the very contemporary style of “Public Enemies.” There are moments that captivate and draw drama from notation, a dance of objects and men, from the way they dress to the way they move. Mann has also advertised his insistence on using real locations, not only the recreated stretch of Lincoln Avenue for the inevitable events outside the Biograph Theater, but the prison in the opening jailbreak and the Wisconsin retreat that leads to an epic firefight between Agent Purvis’ men and Dillinger’s accomplices. A close shot of Dillinger/Depp grasping a doorknob carries a mysterious weight like a shot from Bresson, but for Mann it’s even more freighted, tangibly fetishistic: it’s the same door, the same doorknob that Dillinger himself touched on that night. Similarly, the steps from the Biograph to the alley where Dillinger died are marked out to match the actual events, for the actors to “see” what the real-life players saw at the time.

Yet without the emotional yet elusive visual and aural grace notes Mann brings to his work, that would be meaningless. The reflection of pink neon off the crimson silk of a lawman’s tie as he stands in wait under the Biograph marquee; a patch of sodium-vapor orange city sky above a bridge as magnetic and floating as a square in a Rothko canvas; traveling shots taking in the rippling pattern of poorly annealed old-fashioned windows at a fluttery instant; a cut at the end of a momentous phone call between Johnny and Billie suddenly pushing her to the end of the frame, a patterned wall choking her with extended, suspended space. The beautiful ending suggests a refashioning of the last scene of Joseph Conrad’s novella, “Heart of Darkness,” but wherever it was drawn from, it’s a crackerjack capper.