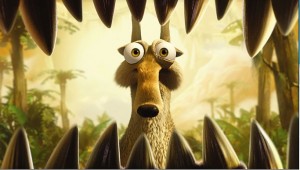 The fun cohort of prehistoric critters return for a third installment of family-oriented animation. Manny the woolly mammoth (voiced by Ray Romano), Diego the saber-toothed tiger (Denis Leary) and Sid the sloth (John Leguizamo) teamed up for a trek to take a human baby back to its father in “Ice Age” (2002). “Ice Age: The Meltdown” (2006) added Ellie (Queen Latifah) as a mammoth mate for Manny. “Ice Age: Dawn of the Dinosaurs” sees the birth of their first offspring. The message: moms love babies, and males love adventure. As their pal lumbers into fatherhood, single Sid adopts some dinosaur hatchlings and Diego ponders a solo odyssey. The exodus motif of the last film—outrunning a deluge of melting ice water—is now multiplied into a multitude of chases and rescues. The new terrain is a tropical underground where dinosaurs roam. This hollow-earth is home to a new character, Buck (Simon Pegg), a loner pursuing an albino dinosaur. This eyepatch-accessoried, Cockney-accented weasel is modeled on Captain Ahab. Another single male with an obsession returns in recurring bits of classic cartoon action. The kinetic squirrel-rat Scrat continues to chase a nut. A female squirrel-rat named Scratte adds tail to his quest. However, the heartbeat of this franchise is the notion of a blended family, here called a “herd,” where pan-species pals do not eat each other. Step-sibs, are you getting this? Screenwriters Peter Ackerman, Michael Berg, Yoni Brenner and Mike Reiss keep the tone kind and clever, with only three yuks about testicles. Director Carlos Saldanha and co-director Michael Thurmeier lend inventive detail to the physical comedy in this 3-D treat. 87m. (Bill Stamets)