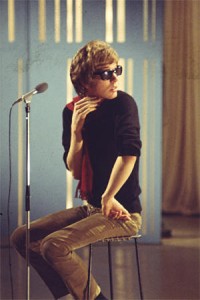 A nonplussed colleague who was less than impressed with Steven Kijak’s fine, haunting documentary “Scott Walker: 30 Century Man” observed that there must be dozens upon dozens of possible subjects for nonfiction films about musicians with small followings and eccentric leanings who are an acquired taste. The phrase, I said, was “dozens and dozens of works-in-progress.” The good fortune is that Kijak’s portrait of the now-sixtysomething publicity-shy Walker, once a teen idol, then unconventional crooner and finally, maker of haunting, near-musique-concrete pop of sorts, is quietly observant of the making of Walker’s most recently released album, “The Drift.” But Kijak is good as well at demonstrating how musicians affect one another, most memorably and innovatively in “listening parties” of several tracks, where a Walker song begins and a musician like Brian Eno is seen listening, joined in another quarter of the screen by another musician like Damon Albarn or Johnny Marr or David Bowie or Jarvis Cocker and then finally four musicians contemplating the sound just as we do. A moment in the studio where Walker instructs a percussionist on how to “play” a side of pig may be the strangest, but there are many fugitive insights as well in this entertaining glimpse of a quiet life as well as the matter of taste, whether instinctual or learned. “He’s got a way of disappearing,” an interviewee says, one of the few hints at his years lost of alcoholism and other dark places. Kijak’s got ways of making him manifest. It’s one of my favorite rock documentaries of the past few years: may it influence many more to come. 95m. (Ray Pride)