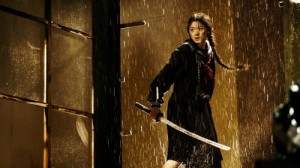 Saya (Gianna) passes for 16 but she’s pushing four centuries. One parent was a vampire, the other was human. That makes her an immortal with issues. She takes her nourishment from bottled blood, yet she has a soul. Outfitted in a navy blue sailor suit and white knee socks, this morose teen is sent undercover to a high school on a U.S. Air Force base in Japan. Her handlers work for a covert Council of Elders defending humanity from vampiredom. All she does is wield her samurai sword with superhuman skill to eviscerate horde after horde of ninja bloodsuckers. Director Chris Nahon (“Kiss of the Dragon,” 2001) always shifts to super-slow-motion in the middle of battles. As well as toward the beginnings and endings too. Presumably the payoff is allowing Saya and her fans to gorge on the sight of blood sprays. What’s new here is hemoglobin that congeals in midair into shiny red globules. Corey Yuen directs the Hong Kong-style action with his usual kinetic verve. Credit production designer Nathan Amondson for detailing the spectacle of genocidal sadism with its dubious beauty. Screenwriter Chris Chow adapts Hiroyuki Kitakubo’s 2000 anime, the story’s source, with little distinction. The one class Saya attends boasts a better than average discussion of “Frankenstein” by her English teacher and the one classmate, a daughter of the general, who befriends the strange new girl. Set during the Vietnam War, “Blood: The Last Vampire” includes gratuitous dialogue attacking the U.S. for treating the Vietcong and Native-Americans as subhuman, but the film fails to imply parallels between vampires and their victims, or between vampires and their exterminators. With Allison Miller, Liam Cunningham, JJ Field, Koyuki, and Yasuaki Kurata. 89m. (Bill Stamets)