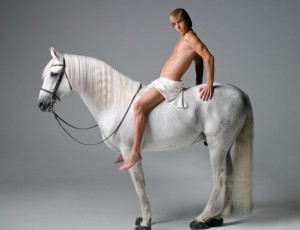 Über-sqüirmy and generally uncomfortably scattershot, “Brüno” is no “Borat.” Where Borat functioned both as a naïf and as a send-up of Western perceptions of the otherness of small countries with odd customs and readily misspelled names, Brüno’s embodiment and disembowelment both of the drive to be famous for being famous and of the most heinous notions of gayness veers from outrageousness to puckishness with little consistency. There’s laughter, but no real feeling of fun. Even with the impression that this master practitioner of twenty-first-century “Candid Camera”‘s gimmickry is working with many fewer real subjects and many more improvisers working in sub-sub-Christopher Guest fashion. Sacha Baron Cohen may have developed a taste for the adrenaline of confrontation, but he likely can’t go much farther with the three characters he created for his British TV series. It’ll be interesting to see what he gets when the mantel of culture warrior falls away and he has to rely on a genius for situation and non sequitir in what will surely be much better movies, movies that don’t rely on shock and a desire to provide a bawdy, distorted, disdainful mirror to the world. Since the movie is a grab-bag of jokes, many reviews will spoil the pong of gags whether sly or disgusting, but the baiting of presidential aspirant Ron Paul is particularly strange, both in Paul’s willingness to suck up to Brüno for press time and in Paul’s spluttering reaction to what ensues. 80m. (Ray Pride)